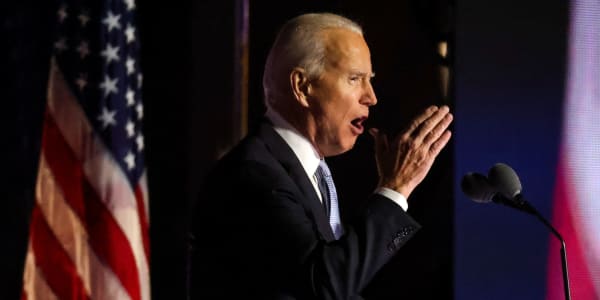 European markets are tracking their global counterparts higher Monday as investors react to Democrat Joe Biden’s defeat of incumbent Donald Trump in the U.S. presidential race, according to NBC projections.

The pan-European Stoxx 600 climbed 1.5% in early trade, with travel and leisure stocks adding 2.9% to lead gains as all sectors and major bourses traded in positive territory.

European markets are tracking their global counterparts higher Monday as investors react to Democrat Joe Biden’s defeat of incumbent Donald Trump in the U.S. presidential race, according to NBC projections.

The former vice president sealed the race after his projected victory in Pennsylvania as well as Nevada, according to NBC News projections on Saturday. The call came four days after Election Day and amid close counts in several battleground states.

Nonetheless, Trump is refusing to concede the election, claiming it’s “far from over.” His team has launched lawsuits in multiple key states, including Pennsylvania and Michigan, and have signaled they plan to press for recounts in some close races.

In terms of individual share price action, British housebuilder Taylor Wimpey jumped more than 11% in early trade after a positive trading update, which led Credit Suisse to increase its price target for the stock.