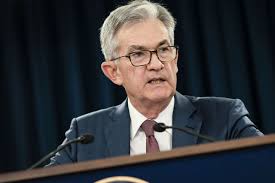 Federal Reserve Chairman Jerome Powell called Tuesday for continued aggressive fiscal and monetary stimulus for an economic recovery that he said still has “a long way to go.”

Noting progress made in job creation, goods consumption and business formation, among other areas, Powell said that now would be the wrong time for policymakers to take their foot off the gas.

Doing so, he said, could “lead to a weak recovery, creating unnecessary hardship for households and businesses” and thwart a rebound that thus far has progressed more quickly than expected.

“By contrast, the risks of overdoing it seem, for now, to be smaller,” Powell added in remarks to the National Association for Business Economics. “Even if policy actions ultimately prove to be greater than needed, they will not go to waste. The recovery will be stronger and move faster if monetary policy and fiscal policy continue to work side by side to provide support to the economy until it is clearly out of the woods.”

The remarks come amid conflicting signs for an economy trying to shake off the unprecedented impacts of the Covid-19 pandemic.

While 11.4 million jobs lost during the associated economic shutdown have been recovered, nearly half of displaced workers remain sidelined. GDP is expected to show a sharp rebound from the 31% second-quarter plunge and housing has been a strong point as well.

However, Powell cautioned that backing off now with fiscal and monetary help runs the risk of losing momentum and bringing about an added downturn that would look not like the government-induced one that began in February, but rather a more traditional downturn that would be harder to recover from and worsen the U.S. wealth gap. That would be one where “weakness feeds on weakness,” he said.

“The recovery will be stronger and move faster if monetary policy and fiscal policy continue to work side by side to provide support to the economy until it is clearly out of the woods,” Powell added.

Businesses specifically hit hardest by the pandemic will need targeted help, he said, nothing that the “right thing to do and the smart thing to do” is to continue to provide support to workers whose jobs may not come back.

The remarks are just the latest calls that Fed officials have made for more fiscal help.

While the Fed has cut its short-term benchmark borrowing rate to near zero and instituted a slew of lending and liquidity programs, Congress remains stalled on providing more help. When the pandemic first hit, the legislators quickly passed the CARES Act that provided forgivable loans to businesses and direct payments to displaced workers, but that funding has run out.

“While the combined effects of fiscal and monetary policy have aided the solid recovery of the labor market so far, there is still a long way to go,” Powell said.

He again noted the disproportionate impact the current downturn has had on those least able to afford it.

“A long period of unnecessarily slow progress could continue to exacerbate existing disparities in our economy. That would be tragic, especially in light of our country’s progress on these issues in the years leading up to the pandemic,” Powell said.