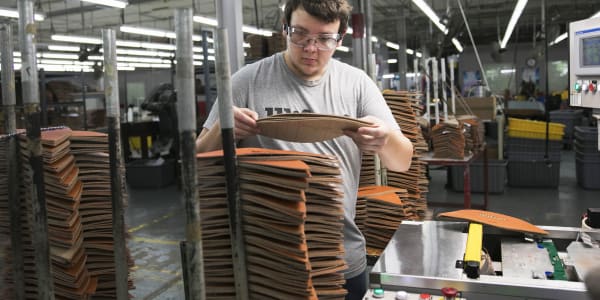 Nonfarm payrolls rose by a lower than expected 661,000 in September and the unemployment rate was 7.9%, the Labor Department said Friday in the final jobs report before the November election.

Economists surveyed by Dow Jones had been expecting a payrolls gain of 800,000 and the unemployment rate to fall to 8.2% from 8.4% in August. The payrolls miss was due largely to a drop in government hiring as at-home schooling continued and Census jobs fell.

“The issue is momentum, and I think we’re losing it,” said Drew Matus, chief market strategist for MetLife Investment Management. “When you go through a significant disruption to the labor market, it takes time to fix itself. That’s without regard to whether there’s a virus.”

The decline in the unemployment rate came along with a 0.3 percentage point drop in the labor force participation rate to 61.4%, representing a decline of nearly 700,000. However, a separate, more encompassing measure that counts discouraged workers and those working part-time for economic reasons also saw a notable decline, falling from 14.2% to 12.8%.

The unemployment decline for Blacks was even sharper than the headline rate, falling from 13% to 12.1%. The Asian rate declined from 10.7% to 8.9%.

As expected, government was the biggest drag on the month, losing 216,000 due to a drop in local and state government education as many schools maintained at-home instruction due to the virus. A reduction in Census workers also pulled 34,000 from the total.

In other sectors, health care and social assistance gained 108,000, professional and business services contributed 89,000 and the transportation and warehousing sector was up 74,000. Manufacturing grew by 66,000, financial activities added 37,000 and the other services category rose by 36,000.

Despite the deceleration in job creation, there were some positive signs as the economy continues its pandemic-era recovery.

Those reporting being on temporary layoff fell by 1.5 million to 4.6 million. Workers holding part-time jobs for economic reasons fell by 1.3 million to 6.3 million, and the totals for longer-term layoffs also decreased considerably.

The temporary layoff total peaked at 18.1 million as payrolls fell by 22 million in March and April.

However, permanent job losses increased by 345,000 to 3.8 million, in total a 2.5 million increase since February, the month before the World Health Organization declared the coronavirus pandemic.

“Permanent jobs losses rose by more than 300,000. That’s not a good thing. The labor force participation rate declined, which pulled the overall unemployment rate down. That’s not a good sign, either,” said Kathy Jones, head of fixed income at Charles Schwab. “We’re looking at state and local government layoffs, we’re looking at a higher level of permanent job losses and more people leaving the workforce. None of that is good for the long run.”

The report comes amid a raft of mostly positive economic signals, including strong signs from the housing market and retail spending, as well as worries that rising coronavirus cases could threaten the recovery.

While millions more remain unemployed, September’s activity means that about 12 million jobs have been recovered since the mid-March economic shutdown that saw about 22 million layoffs.

Average hourly earnings were little changed over the month but still about 4.6% higher than a year ago. However, hourly comparisons are difficult in the current environment considering the virus impact and the continued tendency of higher-wage workers returning to their jobs before those on the lower end.