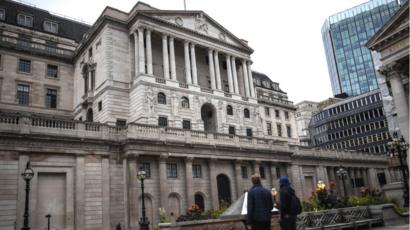 A Bank of England (BoE) deputy governor has spoken out against setting negative interest rates, which would bring the cost of borrowing below zero.

“At present, negative policy rates would be less effective as a tool to stimulate the economy,” Sir Dave Ramsden told the Society of Professional Economists (SPE).

The Bank has so far responded to the pandemic by cutting rates to just 0.1%.

But some policymakers want it to do more.

If interest rates are negative, the BoE charges for any deposits it holds on behalf of the banks. That encourages banks to lend the money to business rather than deposit it.

But with interest rates already low, it’s not clear how much negative rates would help spur new activity.

And such a move raises the risk for banks, which make money by charging interest on loans and are typically hurt by lower rates.

Reducing rates now would also come just as banks face a higher risk of losses due to the pandemic, which has strained the ability of many of their customers to keep up with repayments on loans.

Sir Dave said the Bank of England needed to consider the potential impact on banks further before acting on negative rates.

“If you’ve got negative rates in the toolbox, I feel duty bound, given my duties at the bank, that you’ve then got to explore in more detail the operational considerations which would go with implementing negative rates,” Sir Dave, a member of the BoE’s Monetary Policy Committee (MPC) and Deputy Governor for Markets and Banking, told SPE.

“You don’t want to be in the position where you’ve said you think you could use them, then say at some point in the future, the committee concludes actually we should use them, then you go back and look in the toolbox, and find that actually you can’t use them for an operational reason.”

With interest rates already close to zero, the Bank of England has been looking for creative ways to keep the economy afloat.

Only a handful of central banks have joined the negative interest rates club, including Japan, Sweden, Switzerland and the European Central Bank.

Countries like Switzerland deployed negative rates to try to stop investors from ploughing money into the country, which was pushing up the strength of its currency.

But a blueprint for the UK wouldn’t be as simple as copy and paste.

Savers who don’t fancy being charged to put their money in the bank will just take their business elsewhere. Britain’s banks are also being hit by loan losses as borrowers struggle to keep up with repayments. Squeezing their profits could push them into deeper trouble.

In any case, negative rates aren’t around the corner. The Bank of England is using the next three months to look at how they could be implemented, before deciding whether they want to open the toolbox to use them.

Sir Dave added that the MPC was “not about to use [negative interest rates] imminently”, and that it would “take time” to engage with the banks.

“We’re continuing with a quantitative easing programme – no one is voting at present for negative rates,” said Sir Dave.

“I see the effective lower bound [for interest rates] still at 0.1%, which is where Bank rate is at present. It is useful to stress that.

Sir Dave is one of few members of the Bank’s nine-member Monetary Policy Committee to share his view of negative interest rates since the bank said it was considering such a step last month.

His warning marks a contrast to recent comments by Silvana Tenreyro, an external member of the committee, who told the Sunday Telegraph that evidence from other European countries and Japan suggested that negative interest rates had succeeded in cutting borrowing costs.

The evidence also showed that banks would cope with the extra pressure on their finances, despite the coronavirus pandemic, she added.