The jobs report was better than expected, but market worries gains will be fleeting without stimulus 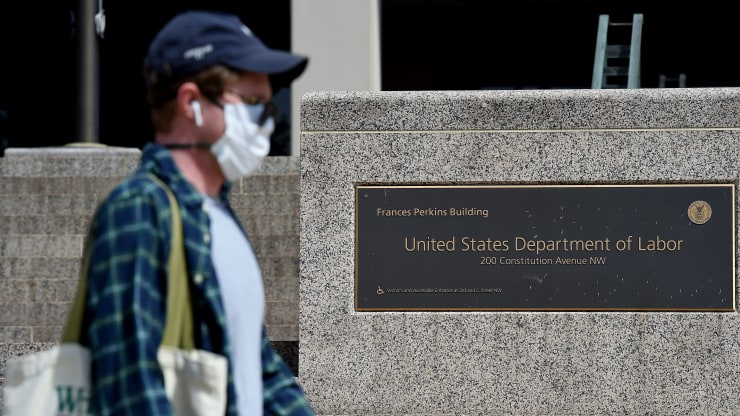 Markets see a slight positive in July’s jobs report, but the focus remains on whether Washington can agree to a stimulus package that could help head off future job losses and aid the still millions of unemployed.

The economy added nearly 1.8 million jobs last month, better than the 1.48 million expected, and the unemployment rate fell more than expected to 10.2% from 11.1%. The pace of gains slowed from the 4.8 million jobs added in June, and the 2.7 million in May.

“The concern was that the reimposition of partial lockdowns was going to cause a W-shaped recovery. At least through early July, that wasn’t the case,” said Jon Hill, senior fixed income strategist at BMO. “One reason for the small [market] response is this is stale, lagged data and we’re going to wait for August numbers.”

Strategists note that much of the recovery in jobs in July was in the leisure and hospitality and retail sectors, two areas that were immediately impacted by the March shutdowns and could be hit again by reclosings.

“Treasurys looked right through the payrolls and appear to be focused on fiscal negotiations going into the weekend,” said  Hill. Talks between House Speaker Nancy Pelosi, Senate Democratic Leader Chuck Schumer and the White House were expected to continue Friday. A deal had been expected by Friday, but talks appeared to have stalled and there was no agreement on key issues. The White House said President Donald Trump could issue executive orders on some aspects of it if there is no deal this weekend.

Stocks were a bit weaker as the market also focused on tensions between the U.S. and China. The 10-year Treasury yield ticked up slightly on the better-than-expected jobs report, before slipping lower to 0.52%.

“I was heartened by the fact this was a pretty widespread improvement from a sectoral perspective,” said Drew Matus, chief market strategist at MetLife Investment Management. “There is a cloud with every silver lining, and this report certainly has cause for optimism and cause for concern.”WATCH NOWVIDEO02:48How unemployment benefits are calculated

Leisure and hospitality employment gained by 592,000, making up one-third of the gain in July payrolls. Many of those are restaurant workers.

“The concern is improvement in leisure and hospitality, and is that a sustainable number, and what is really going on with the state and local government hiring,” Matus said.

Retailers added 258,000 jobs, and employment in that sector continues to be 913,000 lower than in February. Health care added 126,000 as dentists and doctors reopened offices. But manufacturing was soft, with just 26,000 jobs added. Construction jobs increased by 20,000 and there were 21,000 more jobs in financial activities, with the bulk of those related to real estate.

The Republicans in the Senate and Democrats in House proposed two very different stimulus packages. Democrats are seeking to retain the $600 weekly supplemental unemployment benefit that had been paid before it expired last week. There has also been disagreement on how much would be provided to state and local governments.

Ultimately, strategists expect a deal to be reached. They expect compromises, including on the enhanced benefits, with a temporary payment for the unemployed likely being cut to $300 or $400 a week. About 16 million people continue to collect state unemployment benefits, and millions more are receiving benefits under a temporary federal program for gig workers that expires in December.

Some strategists had said the jobs report could be fodder for one side or other in the stimulus talks but it was not seen as strong enough or weak enough to help either side.

“The initial stimulus certainly did the job it was asked to do, and the question is how much more do we need,” said Matus. “I think it’s a reasonable question to ask how much more do we need but at the same point, the first one was so effective because it was fast and it was big. When things are fast and big, you’re going to make mistakes. That doesn’t mean the benefits didn’t outweigh the cost. it wasn’t perfect. Sometimes quantity and speed take on a quality all their own and I think that was the case the first time out.”