The Dow just lost 12% in one week. Here’s why and what likely happens next 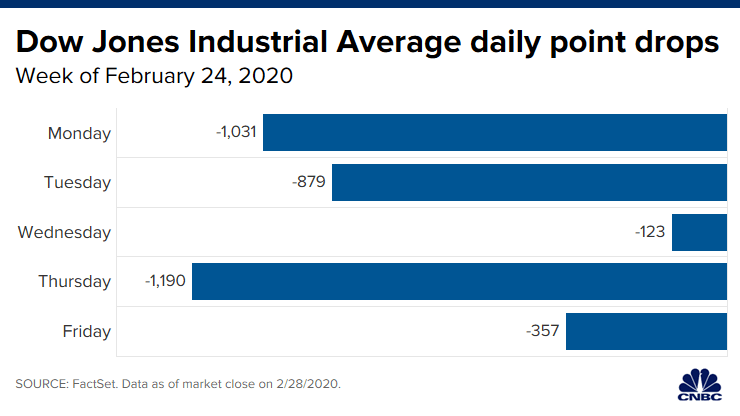 The U.S. stock market suffered a historic pullback this week as the coronavirus spread outside of China, spooking investors and traders out of equities.

The Dow Jones Industrial Average and S&P 500 each dropped 12% and 11% for the week, respectively, marking their worst weekly performance since the financial crisis. The 30-stock Dow posted its biggest one-day points loss ever on Thursday. It also tumbled deep into correction territory, down more than 10% from a record high, along with the S&P 500 and Nasdaq Composite.

Wall Street’s historic shake-up came as worries grew over the coronavirus’ impact on the global economy and corporate profits. The number of new cases in China kept rising this week, while the number of people contracting the virus spiked in South Korea and Italy. This led a slew of companies to issue warnings about their earnings. It also dampened the market outlook for investors worried it could become widespread in the U.S. soon.

“When people don’t know how to quantify things, which is really where we’re at right now, the first reaction in the market is to sell first and figure things out a bit later,” said JJ Kinahan, chief market strategist at TD Ameritrade.

The Dow posted two declines of more than 1,000 this week. Thursday’s loss of 1,192 points was the Dow’s biggest one-day point loss on record. The 30-stock average also ended the week down 14% from a record high.

The S&P 500, meanwhile, posted declines of more than 2% in three of the five sessions this week. Before then, the broad market index had not logged in a decline of that magnitude since August. The U.S. stock benchmark concluded the week nearly 13% below a record high set on Feb. 19. That marks the average’s fastest decline from a record high into a correction ever, outside of a one-day crash.

“The longer this [coronavirus] stays in the minds of market participants, the greater the impact’s going to be not only on the markets, but the economy,” said Dan Deming, managing director at KKM Financial. “That’s why we see these gyrations.”

The market also took a beating this week on an individual stock basis. Only two S&P 500 components — Regeneron Pharmaceuticals and Qorvo — closed higher for the week. Meanwhile, 96% of the entire S&P 500 is in correction territory.

All 30 Dow members ended the week down more than 10% from their respective 52-week highs. Tech giant Apple even dipped into a bear market, briefly trading down more than 20% from its intraday record set on January.

“What we’ve seen the last couple of days is pure liquidation,” said Keith Lerner, chief market strategist at Truist/SunTrust Advisory. “Investors are saying ‘get me out at any cost.’”

“The most important dynamic in the market is uncertainty,” Lerner added. “People are selling first and asking questions later.”

Traders and investors sought protection from the stock market’s decline by loading up on U.S. Treasurys and hedging through options.

The benchmark 10-year Treasury yield broke below 1.15% for the first time ever on Friday. The rate started the week hovering around 1.4%. Meanwhile, Wall Street’s so-called fear gauge — the Cboe Volatility Index (VIX) — surged to 49.15, its highest intraday level since February 2018.

The number of confirmed coronavirus cases in South Korea jumped this week to more than 2,300. That makes it the country with the most confirmed cases outside of China, where the virus’ death toll is now more than 2,700. In Italy, the number of people infected reached more than 600. Cases in Iran, New Zealand and Nigeria were also reported this week.

The number of cases spiking, especially outside of China, raised concern of a prolonged global economic slowdown and spooked investors out of stocks. That uncertainty also led some companies to caution investors about the virus’ impact on their numbers.

Microsoft said Wednesday its current-quarter revenue guidance for its personal computing division — which accounts for 36% of the company’s overall sales — would not be met as the coronavirus slows down its supply chain. PayPal warned Thursday that the coronavirus will negatively impact its revenue forecast. Mastercard said Monday the virus could dent its 2020 revenue.

These factors combined for head-turning declines and wild volatile swings.

Market participants will look for signs of a bottom after the week’s massive downturn.

Since World War II, the S&P 500 has had 26 market correction (excluding the one that started this week). During those corrective periods, the S&P 500 has declined by an average of 13.7% and has taken about four months to recover. That’s of course if they don’t turn into bear markets.