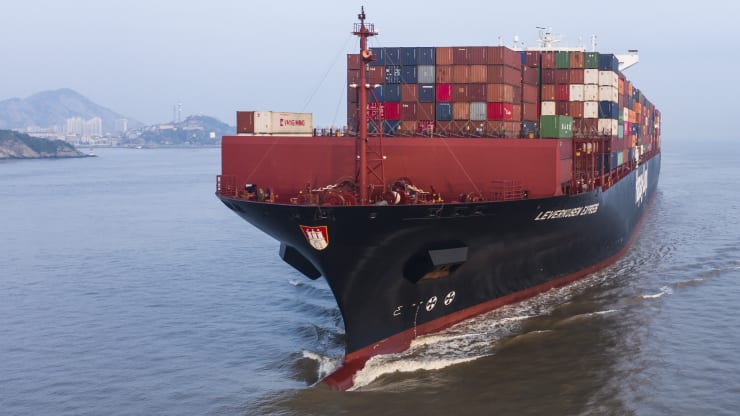 The U.S.-China trade war will cut 2019 global growth to its slowest pace since the 2008-2009 financial crisis, the International Monetary Fund warned on Tuesday, adding that the outlook could darken considerably if trade tensions remain unresolved.

The IMF said its latest World Economic Outlook projections show 2019 GDP growth at 3.0%, down from 3.2% in a July forecast, largely due to increasing fallout from global trade friction.

The forecasts set a gloomy backdrop for the IMF and World Bank annual meetings this week in Washington, where the Fund’s new managing director, Kristalina Georgieva, is inheriting a range of problems, from stagnating trade to political backlash in some emerging market countries struggling with IMF-mandated austerity programs.

The World Economic Outlook report spells out in sharp detail the economic difficulties caused by the U.S.-China tariffs, including direct costs, market turmoil, reduced investment and lower productivity due to supply chain disruptions.

The global crisis lender said that by 2020, announced tariffs would reduce global economic output by 0.8%. Georgieva said last week that this translates to a loss of $700 billion, or the equivalent of making Switzerland’s economy disappear.

“The weakness in growth is driven by a sharp deterioration in manufacturing activity and global trade, with higher tariffs and prolonged trade policy uncertainty damaging investment and demand for capital goods,” IMF Chief Economist Gita Gopinath said in a statement.

Services were still strong across much of the world, but there were some signs of softening in services in the United States and Europe, Gopinath said.

For 2020, the Fund said global growth was set to pick up to 3.4% due to expectations of better performances in Brazil, Mexico, Russia, Saudi Arabia, and Turkey. But this forecast was a tenth of a point lower than in July and was vulnerable to downside risks, including worse trade tensions, Brexit-related disruptions and an abrupt aversion to risk in financial markets.

The IMF said foreign direct investment abroad by advanced economies came to “a virtual standstill” in 2018 after increasing in earlier years to average more than 3% of global gross domestic product annually – or more than $1.8 trillion.

The institution said the decline of some $1.5 trillion between 2017 and 2018 reflected purely financial operations by large multinational corporations, including in response to changes in U.S. tax law.

Global vehicle purchases fell by 3% in 2018, reflecting a drop in demand in China after expiration of tax incentives and production adjustments after adoption of new emissions standards in Germany and other eurozone countries.

Global trade growth reached just 1% in the first half of 2019, the weakest level since 2012, weighed down by higher tariffs and prolonged uncertainty about trade policies, as well as a slump in the automobile industry.

Trade growth was expected to rebound to 3.2% in 2020, however risks remained “skewed to the downside,” the IMF said, with a significant drag on both the U.S. and Chinese economies.

For a table showing IMF country and regional forecasts, see

New IMF projections show China’s GDP output falling 2 percent in the near term under the current tariff scenario and 1 percent in the long term, while U.S. output would decline 0.6 percent over both time spans.

But she was cautious about President Donald Trump’s announcement on Friday of a “Phase 1” U.S. trade deal with China, saying that more details were needed about the “tentative” deal.

The IMF also modeled what would happen if multinational firms in the United States, euro area and Japan reshored enough production to reduce nominal imports by 10%. The lender found that it would drive up consumer prices and reduce domestic demand, while throttling the spread of technology to emerging economies.

“At 3% growth, there is no room for policy mistakes and an urgent need for policymakers to cooperatively deescalate trade and geopolitical tensions,” it said. “Further escalation of trade tensions and associated increases in policy uncertainty could weaken growth relative to the baseline projection.”