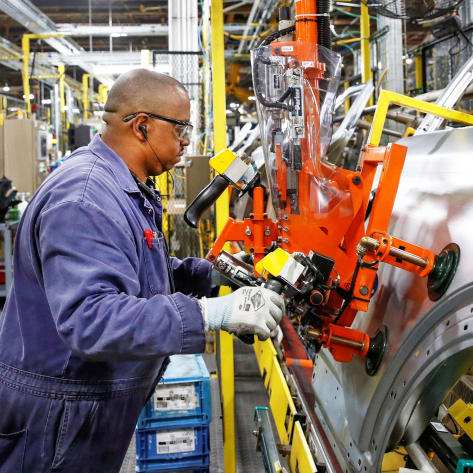 Stocks look to end a sour week on a positive note following the September jobs report.

Investors saw the middle-of-the-road data as shoring up the chances of more accommodation of the Federal Reserve without triggering alarm bells over the economy.

Austan Goolsbee of the University of Chicago Booth School of Business says if a recession is coming, it could come quickly.

“The thing driving this whole thing is that the GDP growth rate is slowing down and a lot of the forecasters are now saying that they expect a one handle for the rest of the year. If we get GDP growth falling down into the ones, I think the jobs numbers are going to fall apart. … If you go back and look at previous recessions, they can turn pretty quick. And if a recession begins, the strongest part of the economy now is that consumer confidence and consumer spending remains strong, that can turn around very rapidly.”

“If we had a number that was very, very strong, and everyone had to reduce their probabilities of further Fed accommodation or midcycle adjustments, I think that would cause risk assets to sort of shake. But this is right in that sweet spot where we’re still growing, but we’re not growing so fast that the Fed can’t continue on that path.”

Robert Shiller, Yale University professor of economics, says a recession is in the future, but timing it could be impossible.

“There will be a recession eventually; whether it’s in 2020, I don’t know. But there will be. And the question is how severe will it be. Economists are not very good at going out another year. But I think that … there are narratives in place that make ourselves a little bit vulnerable.”

“We have seen a significant slowdown over the last year. And I think the weakness is more related to trade. And also some of the softness we saw in spending on services over the summer. People pulled back actually on the discretionary spending — on accommodation and food — in August in response to concerns about the trade war. That negative news effect is much larger than it once was even though consumers are still on very solid footing.”

“The most important thing to recognize here is the limits to growth. I mean, it’s great to see an unemployment rate of 3.5%, the lowest since 1969. But everywhere in this report, you can see that businesses are really finding it hard to find qualified workers, and I think that is having some effect. There was some pent-up demand for labor, because we’ve had over 7 million job openings for over a year. I think it takes a while to feed through, so I’m a little bit more concerned about this. I do think that this to some extent reflects still lingering strength from last year, but I think these job numbers will slow as we head toward the end of the year.”