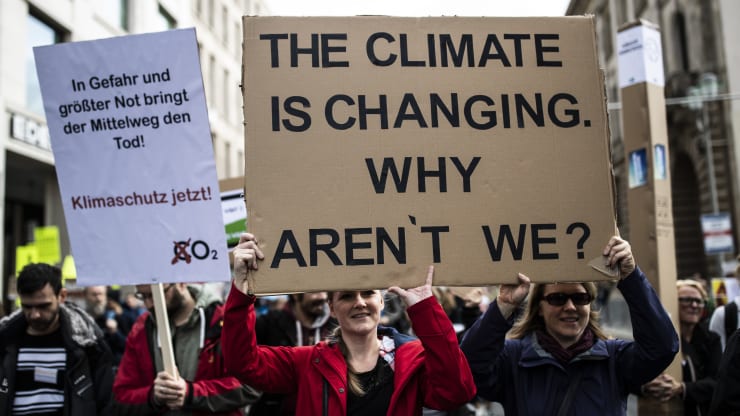 The German government announced Friday it plans to tackle climate change with the introduction of a carbon price on transport and buildings, bigger incentives for buying electric cars, higher duties on domestic flights, as well as other measures. The climate package includes extra spending and tax subsidies totalling 54 billion euros between 2020 and 2023. The package, revealed ahead of a climate summit in New York this week, aims to show a commitment to greener policies while also offering a boost to a flagging German economy.

Despite the headline-grabbing figure, Berlin is already being criticized for not being ambitious enough.

“The amount, 54 billion, sounds not too small but it’s over many, many years,” Krüger told CNBC’s Joumanna Bercetche.

The government funding is set to be allocated from next year until 2023, rising from 9 billion euros in 2020 to 16.5 billion euros in its last year. Furthermore, it is budget neutral — meaning the German government has said it won’t take on new debt to implement the climate package.

“On the short term, I think this won’t change too much. Middle-to-long-term, it could be quite impactful and could help us as well,” Kruger added.

Friday’s announcement followed an earlier decision to help regions hit by the phasing out of coal, a policy set to cost Germany an estimated 40 billion euros. “The sums may sound large. However, due to lengthy planning procedures and severe lack of skilled workers, it will take time until money can be spend on new investments,” Holger Schmieding, from Berenger, said in a note Monday about the impact of the new climate package and investments to diminish the impact of the coal removal strategy.

German spending plans in focus
Germany’s spending plans have been under mounting scrutiny, given its spluttering economy and its fiscal capacity to invest more. On top of this, Germany is currently experiencing negative interest rates — meaning that investors are actually paying to lend to Germany and the cost of financing new projects would be on hugely favourable terms for the country.