The Advent Of Narrative Economics 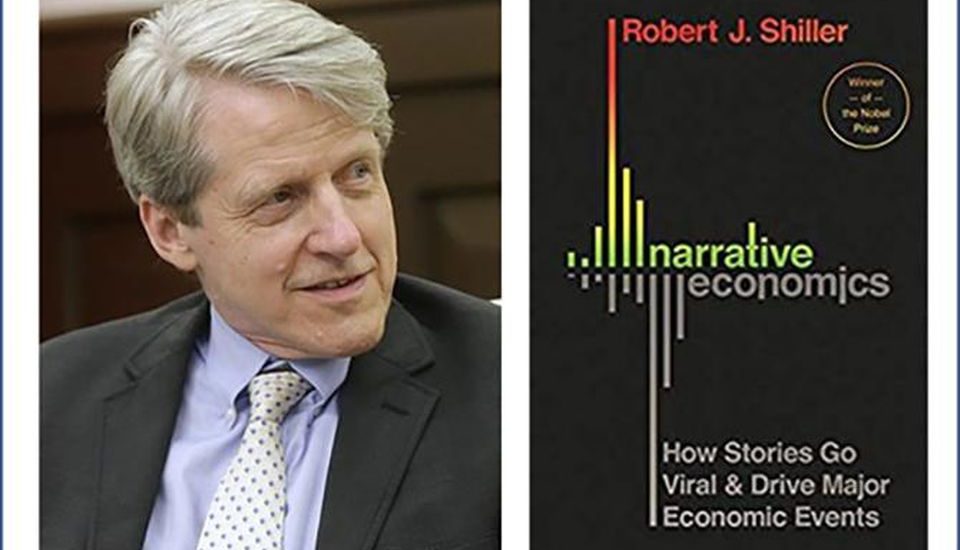 We live in an age of competing economic narratives. After the Federal Reserve cut interest rates by a quarter of a point this afternoon, President Trump tweeted:

Jay Powell and the Federal Reserve Fail Again. No “guts,” no sense, no vision! A terrible communicator!”

If you are trying to figure out what’s going on here, you might check out Robert Shiller’s new book, Narrative Economics: How Stories Go Viral and Drive Major Economic Events (Yale, October 2019).

Narratives drive our lives. Human beings think in stories, understand the world through stories, make plans and decisions in stories and organize their lives in stories. Leaders in politics, government and business use stories to explain what is happening and to inspire change. Although stories drive our decisions about how and where to invest, how much to spend and save, and help propel major economic events and policies, economists have systematically neglected the role of narrative. Now Robert Shiller’s new book, Narrative Economics aims to change that.

Shiller, who shared the Nobel Prize in Economics in 2013, argues for a whole new branch of economics—narrative economics.

By narrative economics I mean the study of the spread and dynamics of popular narratives, the stories, particularly those of human interest and emotion, and how these change through time, to understand economic fluctuations.”

As a macroeconomist, Shiller is particularly concerned with the phenomenon of contagious narratives which can drive big economic events.

We need to incorporate the contagion of narrative into economic theory. Otherwise we remain blind to the very real, very palpable, very important mechanism for economic change, as well as a crucial element for economic forecasting… Ultimately narratives are major vectors of rapid change in culture, in zeitgeist and in economic behavior.”

The book is a magisterial account of more than a century of history of ten pairs of “perennial economic narratives,” in which one narrative emerges, only to be replaced by its counter-narrative, which in turn is replaced by the original narrative in a new form, and so on.

These include narratives of panic versus confidence; frugality versus conspicuous consumption; currency stories; machines as job creators versus job killers; artificial intelligence; real estate and stock market booms and busts; and evil business vs evil workers. In each case, Shiller details the ebb and flow of the competing stories and the apparent economic consequences, such as war, mass unemployment, and increased inequality.

Shiller shows how old tools like focus groups and new tools like textual analysis of social media can shed fresh new light on what is occurring in the economy, to supplement the standard economic tool-set. For his statistically minded brethren, he also shows how economists might go about tracking and measuring narratives in a reassuringly rigorous and quantitative fashion.

A Blow To A Core Economic Assumption Of Economics

Shiller’s narrative economics is a fresh blow to the core assumption of economics that “people are consistent optimizers of a sensible utility function using all available information, with rational expectations.” This core assumption has been tempered by the findings of behavioral economics, which showed not only that “people do not always act rationally:” in some contexts, Daniel Kahneman, Dan Ariely, and others have shown how people act in ways that systematically at odds with that of a rational optimizer.

Now Shiller proposes the formal study of narratives as important exogenous factors bearing on the economy. Shiller is particularly interested in the macroeconomic impact of narratives that become contagious in the same way that diseases become epidemics. He cites the emergence of Bitcoin—now worth some $300 billion—and the story of the Laffer Curve— which led to massive tax cuts—as examples of narratives that had large economic impacts.

In some ways, Shiller’s narrative economics offers a bigger challenge to the foundations of economics than behavioral economics, which mainly offers footnotes to the “rational optimizer” model. Behavioral economics shows patterns of behavior in which people systematically act differently from what you might expect as compared to what is “objectively rational.” It does not fundamentally challenge the underlying idea of predictable patterns of behavior that can be studied in a rigorous mathematical fashion.

By contrast, Shiller’s narrative economics points to unique narratives that have thoroughly unpredictable consequences. Although some narratives are “perennials” and can re-emerge, often in new forms, each narrative is a one-off. To some economists, the idea of studying one-off narratives is almost an affront to the very conception of economics.

Despite the difficulties of studying such narratives, Shiller suggests that it would be professional malpractice not to try to understand them and grasp their implications. To support his argument, he points to the miserable track record of economists in forecasting recessions—a charge that he can comfortably make, having himself accurately forecast the 2000 dot-com bust and the Great Recession of 2007-2008.

Yet Why Only Macroeconomics?

As a macroeconomist, Shiller is particularly interested in the macroeconomic impact of contagious narratives. He is also well aware of the central role in narrative in people’s lives. In his Presidential address on narrative economics at the 129th  annual meeting of the American Economic Association, January 7, 2017, Chicago, IL, he cited with approval the 1938 statement by the existentialist philosopher Jean-Paul Sartre:

A man is always a teller of tales, he lives surrounded by his stories and the stories of others, he sees everything that happens to him through them; and he tries to live his life as if he were recounting it.”

Unlike most of his economist colleagues, Shiller is open to learning from other disciplines of history, anthropology, political science, sociology, psychology, and even literature. All these disciplines recognize the central role of narrative in human affairs, an interest that has accelerated in the last ten years.