BEIJING — The Chinese central bank’s new interest rate is the latest attempt by authorities to boost lending to privately run, smaller businesses — but that may not be sufficient to add an extra boost to the slowing economy.

As China’s growth slows, authorities are under increasing pressure to boost the economy without exacerbating existing concerns about high debt levels or property prices.

The People’s Bank of China made its first move on Tuesday to implement a long-awaited change to its interest rate policy by releasing the first monthly figure for a new “loan prime rate,” or LPR.

The key point of the newly revised LPR is to increase the role of market forces in determining rates, and lower financing costs to the real economy, Liu Guoqiang, deputy governor of the People’s Bank of China, said Tuesday. He was speaking in Mandarin, as translated by CNBC, at a special press conference on the new rate.

While the so-called interest rate reform improves the effectiveness of monetary policy, it cannot replace monetary or other kinds of policies, Liu said.

“I think LPR could help lower the funding cost for SMEs, albeit modestly,” Larry Hu, chief China economist at Macquarie, said in an email. “But it could not do much about the key constraint for credit growth at this stage: the lack of credit demand.”

In the past year, the country’s top leaders have repeatedly emphasized the need to boost financing to private companies. In fact, the Chinese central bank introduced a special “targeted medium-term lending facility” (MLF) in December for financial institutions to lend to small and private firms.

Months later, it’s still not clear how much better the companies are doing. China reported growth of 6.2% in the second quarter, the slowest in at least 27 years, amid rising trade tensions with the U.S.

Privately run businesses account for the majority of employment and economic growth in China. But the country’s giant state-owned enterprises have typically had an easier time getting loans from Chinese banks, the largest of which are also state-owned.

The slight difference means “the imminent impact of the PBOC’s announced reforms to the loan prime rate (LPR) mechanism will be modest,” Liu said in a note. She added in a phone interview that the impact on corporate bond issuance remains to be seen, an area in which multiple factors beyond loan pricing are at play. 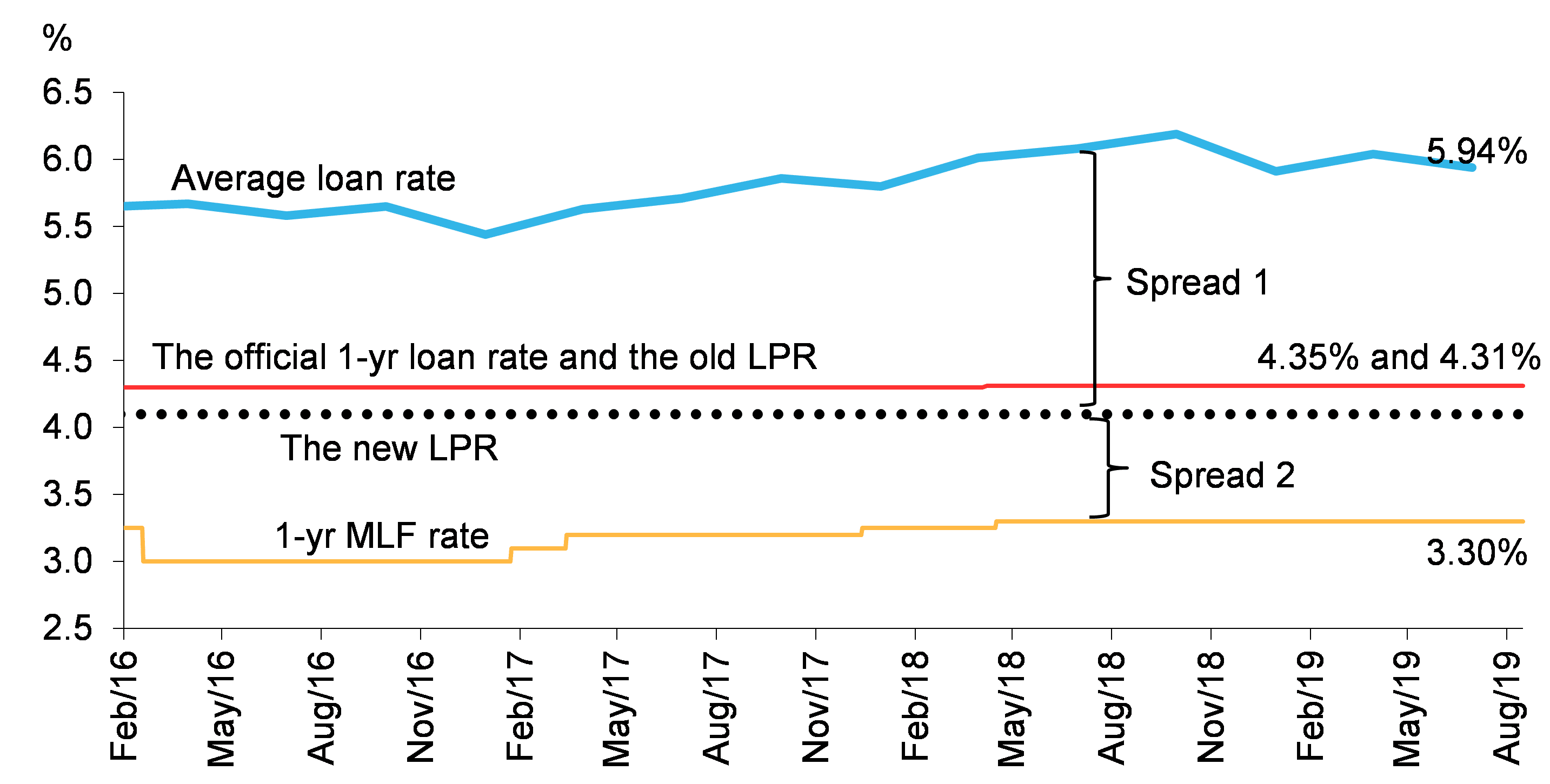 A lower rate may not be enough

During Tuesday’s press conference, Zhou Liang, vice chairman of the China Banking and Insurance Regulatory Commission, pointed out that loans for small and micro-sized enterprises (SMEs) surged 35.14% from the beginning of the year to the end of June, to 2.3 trillion yuan ($325.56 billion). The pace of growth far exceeded that of other kinds of loans, by more than 28 percentage points, Zhou said.

However, in addition to a host of other disappointing July data which pointed to weaker growth, official reports last week showed new loans grew more slowly than expected.

The lower rate only applies to new loans. Some analysts also noted that companies most directly affected by the new LPR tend to be higher-quality businesses that can often already get loans with lower interest rates. One reason why state-owned banks are reluctant to lend to smaller businesses is there isn’t a standard, easy way to assess risk in China.

“The problem of loans has not been in the interest rate, but rather in the loan size, industry investment, loan-to-deposit ratio and other limits from non-market factors,” Zhao Bowen, research director at Beijing-based Blue Stone Asset Management, said in a Chinese-language report earlier this week, according to CNBC’s translation. “Only by removing these non-market factors can the loan interest rate fully be driven by the market.”

In terms of market forces, the People’s Bank of China said the LPR will be guided by the medium-term lending facility, which is seen as more reflective of market needs. The number of banks playing a role in setting the new loan prime rate every month has also been expanded by eight — including two foreign ones — to a total of 18 institutions.

Although China’s monetary policy system is more complex than say that of the U.S. Federal Reserve, the previous rate that served as the PBOC’s benchmark hasn’t been adjusted since 2015.

“In our view, the LPR’s reference rate on the MLF is still not a full market-oriented rate, given that the MLF rate is a policy rate and does not fully reflect changes in banks’ wholesale funding costs. However, it is an improvement and reflects the PBOC’s willingness to improve the transmission efficiency of the policy rate,” S&P Global Ratings credit analyst Cindy Huang said in a note Wednesday. “However, lowering funding costs in the real economy remains a challenge in our view.”