China fixes its yuan midpoint at 7.0326 per dollar

China’s central bank set the official midpoint reference rate for the yuan at 7.0326 per dollar on Tuesday, stronger than what analysts were expecting, but weaker than the previous session.

It was the fourth consecutive session where the People’s Bank of China fixed the midpoint at a level weaker than the psychologically important 7-yuan-per-dollar mark.

Analysts were predicting the midpoint to be set at 7.0421 per dollar after the yuan last traded at 7.0578 in Monday’s session, according to Reuters estimates.

The yuan has become a focal point among investors because of the ongoing trade war between the United States and China, which escalated earlier this month when President Donald Trump said the U.S. is putting 10% tariffs on another $300 billion worth of Chinese goods starting Sept. 1.

The PBOC lets the spot rate trade with a range of 2% above or below the day’s official midpoint fix and this is known as the onshore yuan. The less restrictive exchange rate used outside mainland China is known as the offshore yuan. Investors usually look at the difference between the onshore and offshore exchange rates to determine if the Chinese central bank is willfully manipulating the yuan.

“Forget about the psychological important level, (the yuan) has entered into a new era,” Tommy Xie, head of Greater China research at OCBC Bank, wrote in a Tuesday morning note. Xie explained that the yuan is likely to move towards a cleaner floating system, where market forces would potentially have a greater say on the exchange rates.

“The latest observation shows that China’s individual and corporates have been more rational with less foreign currency hoarding activities. This may create the window for China to test the new currency regime,” he said, adding volatility surrounding the currency will likely go up to absorb the external shock.

Still, that does not mean China would allow the currency to freely float, and that Beijing will not hesitate to intervene if the yuan deviates too much from its fundamental level, Xie explained.

The yuan depreciated past 7 per dollar last week for the first time since the global financial crisis of 2008, which prompted the U.S. Treasury Department to designate China as a currency manipulator. A weaker currency makes a country’s exports cheaper and the Trump administration has consistently complained that a cheaper yuan will give China a trade advantage. 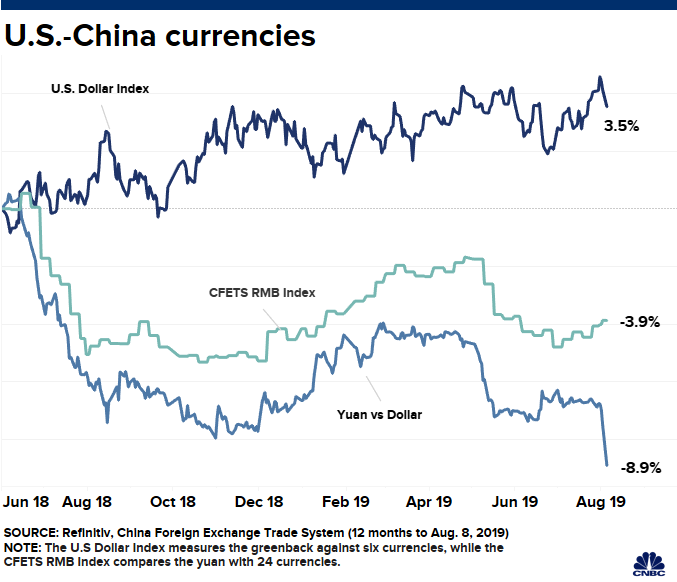 “The recent sudden devaluation of the (yuan) sounds like a deja vu and brings us to review the August 2015 experience,” Alicia Garcia Herrero, chief economist for Asia Pacific at Natixis, wrote in a note dated Aug. 12. “This is in line with our view that there is no point of defending a psychological level under the priority of growth.”

Garcia Herrero said that given the risk of additional tariffs from the U.S. and China being labeled a currency manipulator, the Chinese currency, which is also known as the Renminbi, is “likely to face higher depreciation pressure and hence potential capital outflows.”

“We believe that a large depreciation will be avoided as it will push too much capital out of China and put further constraints on liquidity, and thereby growth,” Garcia Herrero said, adding in the onshore market, volatility will be guided by a gradual change in the daily midpoint fix. In the offshore market, “the liquidity pool is much smaller and more China’s central bills will be issued to mop up the liquidity to avoid speculation.”

Further depreciation of the yuan would also depend on some of the moves coming out of Washington, according to Alex Wolf, head of investment strategy in Asia at J.P. Morgan Private Bank. If the tariffs were to go into effect next month, then more weakness in the Chinese currency is likely, he told CNBC’s “Squawk Box” on Tuesday.

“But, I think we have to think of it though as market-driven depreciation, not necessarily a devaluation,” Wolf said. “If you see all of China’s goods to the U.S. falling under tariffs, then it makes sense for the Renminbi to depreciate against the dollar.”

He added that the PBOC is letting market forces push the yuan in a direction that it was, otherwise, going to move in anyway, without intervening to artificially support the currency.