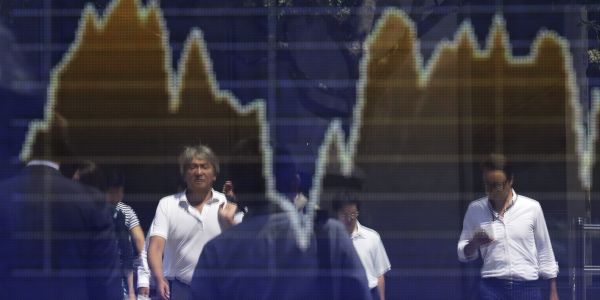 President Donald Trump said last week the U.S. is putting 10% tariffs on another $300 billion worth of Chinese goods starting Sept. 1.

Shares in mainland China slipped by the afternoon: The Shanghai composite shed 2.43% while the Shenzhen component fell 2.65%. The Shenzhen composite tumbled 3.028%. In Hong Kong, the Hang Seng index slipped 0.71% after earlier dropping more than 2%.

The Tuesday session in Asia followed overnight declines on Wall Street, where the Dow Jones Industrial Average plunged more than 700 points, the S&P 500 dropped nearly 3% and the Nasdaq Composite fell 3.5%. It was the worst percentage drop for all three indexes this year.

The Chinese Ministry of Commerce said Chinese companies have stopped purchasing American agricultural products in response to Trump’s latest salvo and added it would “not rule out” tariffs on newly purchased agricultural goods after Aug. 3. For its part, China is one of the largest buyers of U.S. agriculture.

In a closely-watched move, the People’s Bank of China set the midpoint for the yuan at 6.9683 per dollar.

The Chinese central bank sets a daily rate for the currency, allowing it to trade in a band against the greenback within 2% of the midpoint value, also known as the onshore yuan. Its offshore counterpart is used by foreign investors and banks.

On Monday, the onshore Chinese currency weakened past the psychologically important 7-yuan-per-dollar threshold for the first time since 2008.

”“I think the issue now is that people are not sure where exactly you draw the line,” Daryl Liew, head of portfolio management at REYL Singapore, told CNBC’s “Street Signs” on Tuesday. “That 7 handle has held for so long that market expectations are already all built in, now there’s a lot of market uncertainty with regard to where exactly that’s gonna go.”

Following that, the U.S. Treasury Department designated China as currency manipulator — a move that no White House had exercised since the Clinton administration.

Still, analysts said there was questionable legitimacy regarding the U.S. Treasury’s claims.

“On the face of it, this does not have strong grounds,” Michael Hirson, practice head for China and Northeast Asia at Eurasia Group, told CNBC on Tuesday.

“Regardless of how you look at it, the simple truth is China has been intervening mostly to prevent the currency weakening, not to prevent it from strengthening,” Hirson said.

“Politics once again gets in the way of objective analysis,” Stephen Roach, senior fellow at Yale University, told CNBC’s “Squawk Box” on Tuesday.

Beijing previously made a veiled threat about rare earth minerals that are crucial to the U.S. technology industry.

At present, China is the world’s largest producer of rare earths, a critical component in the manufacturing of products ranging from smartphones to electric vehicles.

Still, some analysts say China’s ability to use the material as leverage in its trade war with Washington is limited.

Shares of Lynas, the largest producer of rare earths outside of China, also jumped 7.87%. Reuters reported that Malaysia plans to extend the firm’s license to operate a rare earths processing plant in the country, ahead of a Sept. 2 deadline.

The U.S. dollar index, which tracks the greenback against a basket of its peers, was at 97.454 after declining from levels around 98.0 yesterday.

U.S. futures on Monday evening stateside pointed to further declines for stocks on Wall Street when they open later Tuesday, with the Dow implied to open lower by more than 150 points.