Venezuela hyperinflation hits 10 million percent. ‘Shock therapy’ may be only chance to undo the economic damage 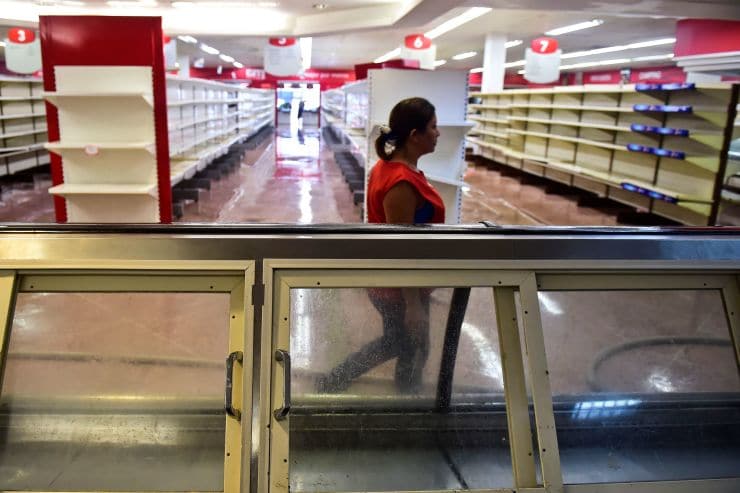 Venezuela’s crisis has been marked by corruption, hyperinflation, one of the world’s highest homicide rates, food and medicine shortages and the largest exodus “in the recent history of Latin America,” according to the UN Refugee Agency.

Its chances to recover may start with President Nicolas Maduro stepping down or being forcibly removed — either by the opposition or through foreign military intervention. But that would just be the first step to get the ruined economy on the road to recovery. A major course of economic shock therapy will be required.

Venezuela’s hyperinflation rate increased from 9,029 percent to 10 million percent since 2018, according to the International Monetary Fund, though it is expected to decline to back below 1 million percent due to recent moves by the country’s central bank, according to a recent IMF forecast.

But the economic situation remains dire: The IMF says the cumulative decline of the Venezuelan economy since 2013 will reach 65% this year — for 2019 the annual decline forecast has increased from 25% to 35%. The five-year contraction is one of the worst in the world over the past half century and one of the few that was not caused by armed conflicts or natural disasters, the IMF stated earlier this week.

Some experts believe that in order to regain control over Venezuela’s monetary system and zero out hyperinflation, drastic decisions will need to be taken.

“Venezuelans who have been suffering all of this time are going to be faced with a very dramatic, very draconian policy aimed at bringing their monetary system under control,” said Dr. Eduardo Gamarra, professor of politics and international relations at Florida International University.

Shock therapy supports the implementation of drastic economic policies to combat hyperinflation, shortages, reduce the budget deficit — Venezuela’s current budget deficit stands at –29.95% in relation to GDP— and transition from a state-controlled economy to a mixed one.

It was used in post-communist Poland and Russia, and in other countries like Chile and Bolivia, where it successfully ended hyperinflation. 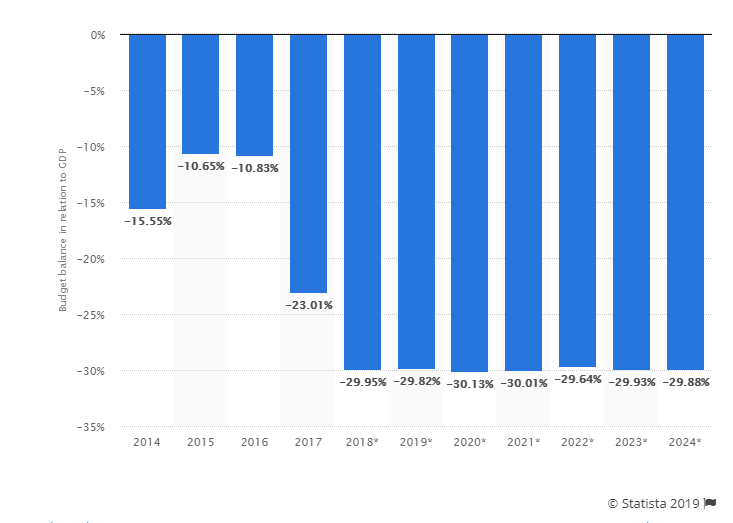 Venezuela will have to transform its current scheme of restricting foreign investment in order to fund the restoration of the energy sector, as well as its infrastructure, including the country’s roads and bridges and the power grid.

The petrostate recently experienced a weeklong blackout caused by the deterioration of the power grid, leaving people in 19 of 23 states without running water and causing four deaths.

“They need to rebuild everything, but the state is bankrupt and has no ability to fund any of these projects,” Gamarra said. “Unless they invite major foreign investment, I don’t see where the revenue is going to come from, because it’s certainly not going to come from oil.”

Venezuela is home to the world’s largest oil reserves, and its economy has been tied to the ups and downs of the international price of oil for decades — oil constitutes about 25% of the country’s GDP and 95% of its exports. But the country’s oil production reached its lowest point since 2003 this year, when production went from 1.2 million barrels per day in the beginning of 2019 to an average of 830,000 barrels per day.

The energy sector is only producing a fraction of the 4 million barrels of oil a day it could be producing.

“The sector has to be completely recapitalized,” said Eric Farnsworth, vice president of the Council of the Americas and the Americas Society.

“The government will have to reinvest in that industry. They also need to modernize that sector because they haven’t done anything in the last decade,” Gamarra said.

The World Bank and IMF

Besides foreign investment, Venezuela will likely need help from multinational institutions such as the World Bank, the Inter-American Development Bank and the Development Bank of Latin America in order to fund the infrastructure development.

It is not rare for a South American country attempting to recover from an economic crisis to accept large loans from multinational institutions. The World Bank and the International Monetary Fund played an instrumental role in Bolivia’s economic recovery in 1985 by pledging a total of $250 million in loans. Chile also received multimillion-dollar loans from international institutions such as the Inter‐American Development Bank and the World Bank throughout the ’70s in order to manage its mounting inflation rates and debt.

During the recent political unrest in Venezuela, the IMF and World Bank both indicated they were prepared to help, but the leadership uncertainty — as Venezuela’s opposition chief Juan Guaidó attempts to take control — made these institutions’ positions difficult. The U.S. has the largest share of votes in both institutions. Some major powers continue to recognize Maduro’s government, such as Russia and China.

The U.S. government has indicated it would offer both investment and credit to the country, but only after regime change to a democratic government.

Leadership negotiations are set to resume later this week, according to Carlos Vecchio, a Venezuelan diplomat representing the opposition, who spoke at the National Press Club in Washington D.C. on Tuesday. Although he would not specify exactly when or where the talks would take place, he expects a resolution by the end of this year. Vecchio said Guaidó would prefer a peaceful transition rather than international intervention to remove Maduro.

Current IMF managing director Christine Lagarde recently told The Economist Radio, “As soon as we are asked by the legitimate authorities of that country to come in and help, we will come in. It is going to require significant financing from all the international community.”

Maduro and his predecessor Hugo Chavez have refused to provide the IMF with information it would need to perform audits. Lagarde told The Economist that she could not be specific about an aid package but added, “We will open our wallet, we will put our brain to it, and we will make sure our heart is in the right place to help the poorest and the most exposed people,” she said.

Back in 2007, when Venezuela was flush with cash from years of a booming oil business, Chavez paid off all of the country’s debt to the World Bank and severed ties with both it and the IMF.

Experts urge Venezuela to diversify its economy from primarily oil production in order to prevent a similar crisis in the future.

“If you depend solely on the export of a single product, you are bound to the ups and downs of the oil price,” the University of Florida’s Gamarra said. “You have to diversify your exports, you have to have a range of high value-added exports, because your economy has to be able to overcome moments of downturns in your principal commodities. Unless they diversify, they’re going to go through this again.”

The lack of human capital is another issue Venezuela will have to address in order to recover from its economic crisis.

Venezuela has lost more than 10% of its population in recent years. The number of Venezuelan migrants and refugees has reached 4 million and is expected to surpass 5.3 million by the end of this year, according to the UN Refugee Agency.

Many of those who have fled will most likely not return. They are making their living elsewhere; their children are attending college and are finally comfortable after starting from zero in a foreign land. The idea of leaving everything behind to return to Venezuela and help rebuild the country might not be appealing.

The lack of a solid professional class will be the primary issue holding Venezuela back, Farnsworth of the Council of the Americas said.

“Venezuela has been bleeding their professional class for years. The money will be there. Money is going to show up if they see opportunity. But particularly in the petroleum sector, Venezuela’s main productive sector, you have to have highly educated and experienced managers, engineers … That professional class left Venezuela years ago.”

Gamarra is concerned about the lack of human capital pushing out the timeline for economic recovery.

“Venezuela is taking a huge, huge loss of human capital more than anything else,” he said. “And whenever a country loses such a large number of people, it’s not that those who remain behind aren’t capable, but a lot of those who left are the educated, the wealthy, the kind of people you need to rebuild a country.”

Venezuela will have to develop a new professional class through steps including the reformulation of its education system, which will take years to accomplish.

China, Russia and Cuba have enabled Maduro’s continuation in power by lending money, providing weapons, intelligence support and political advice — relationships that date back to the regime of former Venezuelan president Hugo Chavez. Some experts believe these world powers need to be held responsible for it.

The Venezuelan petrostate has relied on China and Russia to stay afloat — they have given Venezuela billions of dollars in loans and investments over the past decade.

By some recent estimates, China has become the world’s largest official creditor, surpassing institutions like the IMF.

“The external support of those countries, in particular, has certainly enabled the continuation of the Maduro regime, because they have provided resources through the purchases of petroleum,” Farnsworth said. “Those three countries have clearly made the transition more difficult. They have enabled Venezuela’s collapse.”

Some experts agree that these countries, especially China, should contribute to the alleviation of the humanitarian crisis in Colombia, Brazil and other nations affected by the mass exodus, as well as using its wealth to contribute to the economic recovery of Venezuela.

“If they want to engage in the Western Hemisphere, they have to engage in other ways, not just by selling products and then skedaddling when things get tough,” Farnsworth said. “Try to address some of the problems in the region … particularly problems that they themselves have helped to cause.”

Venezuela’s recovery will require a decade-long transformation after a 20-year-long ordeal, rebuilding the country from the ground up.

But the experts say socialism was not the root cause of Venezuela’s problems. Corruption and mismanagement are to blame for the collapse of the oil-rich country.

“It was, and I hate putting labels on it … but it was really a scheme to scam the oil revenue, to promote the Bolivarian model, which again was not socialism to any extent,” Gamarra said. “Everything was done through this corrupt scheme where they skimmed the money off the top and did everything in such a corrupt manner that it only benefited a few.”

“They could have created the Emirates. The King Chavez. But still spend all of that money on Venezuela. Instead, they blew it. It was money blown through corruption and these international alliances,” Gamarra said. “And so however you look at it, even from the kindest, kindest way, it was a model that was bound to fail.”