Cramer: Trump is ‘hungry for tariffs’ and trade talks are one tweet away from ‘blowing up’ 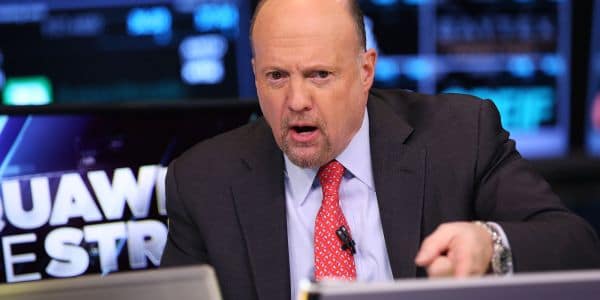 CNBC’s Jim Cramer said Monday that the Trump administration is close to placing additional tariffs on Chinese goods as the yearlong trade war drags on.

The Chinese are ’one tweet away from blowing it up, ” Cramer said on “Squawk on the Street. ” Beijing has yet to purchase American goods as agreed upon, he added.

Last week, President Donald Trump tweeted that China “is letting us down” by not buying the goods “that they said they would.” The increased purchases would not only help cut the U.S. trade deficit with China but assist farmers, as Trump seeks reelection in 2020.

“We’re about to get tariffs any day now,” Cramer added. “I don’t think people realize the president is hungry for tariffs.”

Trump in May slapped 25% tariffs on $200 billion worth of Chinese goods and has threatened duties on an additional $325 billion of goods as trade negotiations continue. The additional tariffs would effectively cover all Chinese imports in the United States.

But Washington agreed to hold off on raising levies as long as China would buy more U.S. agricultural products, after the leaders of the world’s two largest economies met last month.

And it’s a move that Cramer doesn’t think Trump will hold onto much longer.

“They (Chinese leaders) better stop playing politics and better start ordering, because most of the industrial companies that I talk to are ready for the next big increase, maybe within the next two weeks,” the “Mad Money ” host said. “We’re about to get tariffs of $300 billion any day now.”

A White House spokesman was not immediately available for comment.

The tariffs have been costly for Beijing, with China reporting last week that it grew just 6.2% in its second quarter. It’s the weakest rate reported in at least 27 years, according to the country’s statistics bureau.