This is now the longest US economic expansion in history

This month marks the 121st month of the economic expansion arising out of the great financial crisis, making it the longest run on record going back to 1854. 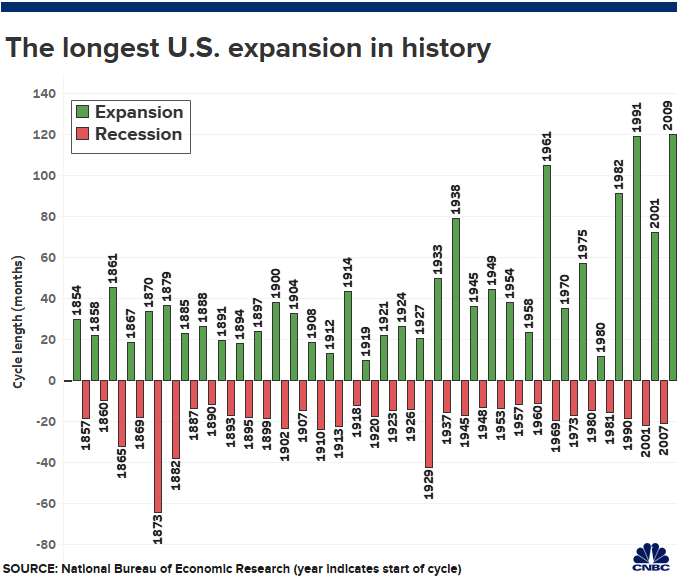 This cycle, starting in June 2009, breaks the record of 120 months of economic growth from March 1991 to March 2001, according to the National Bureau of Economic Research.

Perhaps because of the overhang of the housing crisis, this run has been weaker than past expansions in total. The cumulative total of quarterly GDP growth figures equals 25%, far lower than previous booms. 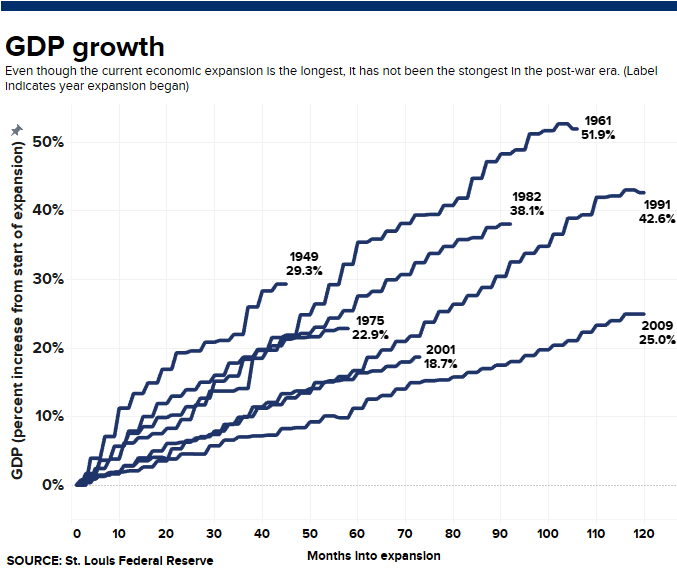 While the unemployment rate has dropped from a peak of 10% in October 2009 to 3.6% in May, the lowest since 1969, job growth has been relatively slower than during other postwar recoveries. 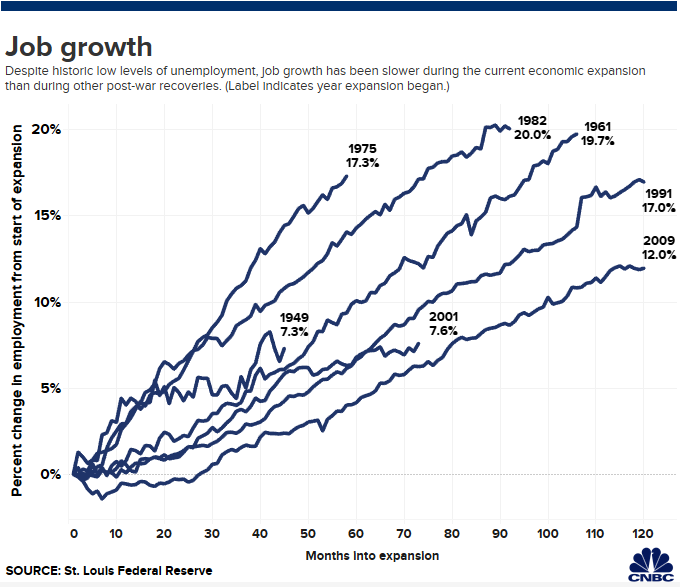 But despite some internal weakness, this expansion keeps trucking along, getting its latest boost from the Trump tax cut of 2018 along with a relaxation in business regulations, according to economists.

However, it now appears to need some help if it’s going to continue to rewrite the record books. The Atlanta Fed’s closely watched GDPNow tracker is pointing to just a 1.5% gain for the economy in the second quarter after a strong gain of 3.2% in the first quarter. The CNBC’s Rapid Update survey puts the GDP tracking estimate at 1.8%.

All eyes will be on the jobs report on Friday for the state of the economy. Economists expect that 158,000 jobs were created in June, up sharply from the disappointing 75,000 in May, according to Refinitiv. The unemployment rate is expected to remain unchanged at 3.6%.

Wall Street seems to be divided on whether this expansion is going to last. Some believe the Federal Reserve will save the day through cutting interest rates, while some think additional stimulus cannot combat the looming downturn or that the Fed won’t be aggressive enough to stave it off.

“We still do not see a recession, but we continue to worry more about downside risks than upside risks to the outlook,” said Torsten Slok, Deutsche Bank’s chief economist, in an email. “To counter the ongoing slowdown in the data and the uncertainty of how much longer the trade war will continue, we see the Fed cutting rates in July, September, and December.”

The corporate earnings picture certainly doesn’t look promising. Now 77% of companies issuing pre-announcements say their profits will be worse than Wall Street estimates, which marks the second-worst quarter on record going back to 2006.