As the stock market makes a comeback, the bond market flashes a ‘dire’ warning about the economy 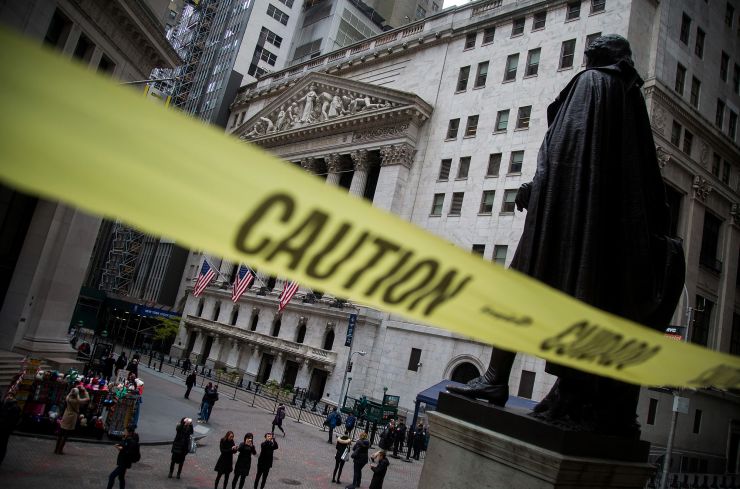 Stocks are weathering the latest bouts of increasing trade war fears, but the bond market is pointing to more trouble ahead.

The S&P 500 is up 1% since a massive sell-off to start last week. The broad index also remains about 3.8% from an intraday record reached on May 1. Futures pointed to more gains on Tuesday.

Bond yields, however, have not been as resilient. The benchmark 10-year Treasury yield is trading at 2.4%, about 40 basis points below its 2019 high and within 10 basis points of its year-to-date low. Yields move inversely to prices.

Bonds are largely seen as a safer investment relative to stocks since they typically are not as volatile. Hence, money usually flows into bonds when investors see downside economic or political risks on the horizon.

“We have continued to see bonds as the better descriptor of the current fundamental environment, evident in our overweight allocation to bonds and underweight allocation to stocks,” Tim Hayes, chief global investment strategist at Ned Davis Research, said in a note on Friday. “And that’s even more apparent now that the escalating trade war and more dire economic implications have been sending bond yields lower globally.”

Earlier this month, the U.S. hiked tariffs on $200 billion worth of Chinese goods as the Trump administration adopted a tougher stance on trade. China retaliated by raising levies on $60 billion worth of U.S. products.

The Trump administration then escalated tensions between the two countries last week by heavily restricting U.S. companies from doing business with Huawei, a massive Chinese telecom company. That led search giant Google to suspend all business with Huawei that involved the transfer of software, hardware and other services. Other companies like Qualcomm and Intel are reportedly halting operations with Huawei until further notice.

These events have led the 10-year Treasury yield to drop about 15 basis points since May 3.

“It remains to be seen how the latest round of tariffs will affect the global economic data to come,” Hayes of Ned Davis Research said. “The trade war worries will most likely remain a negative influence on bond yields and stock prices until a clear turn toward trade peace becomes apparent.”

Stocks resilient but there are ‘chinks in the armor’

Stocks have had a remarkable rally since late December. In that time, the S&P 500 has surged about 21%. However, the market’s gains have not been broad based and have come from some unusual places.

Dave Haviland, managing partner at Beaumont Capital Management, pointed out that transports, small caps and mid-cap stocks have not hit record highs this year. Meanwhile, only four sectors within the S&P 500 have made all-time highs: tech, consumer discretionary and defensive stalwarts real estate and utilities.

“We think there are some chinks in the armor,” Haviland said. If you look at those four sectors, you get the go-go growth of discretionary and tech, which is basically ‘FANG.’ Then you’ve the more conservative, higher yielding real estate and utilities walking alongside them.”

“It reminds me a little bit of 1998-1999, when about 10 companies — about half tech and half health care — kept dragging the S&P 500 ever higher,” he said. “The overall market conditions did catch up to them and they rolled over.”

Ned Davis’ Hayes also points out that while stocks are up sharply this year money has been leaving equity funds all year. According to data from ICI, about $135 billion have been pulled out of stock funds in 2019. Meanwhile, investors have added $169 billion in assets to bond funds this year.

“The contrast in outflows from stocks and inflows to bonds is another sign that bonds have been sending the right message, not stocks,” Hayes said.