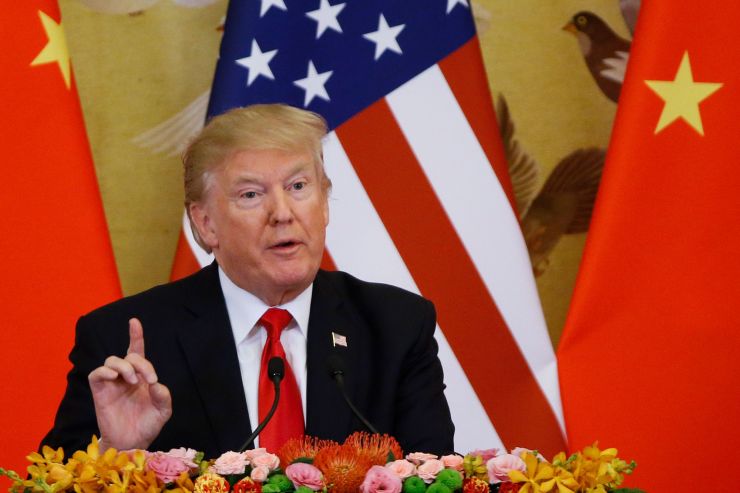 U.S. President Donald Trump may have to choose between supporting the U.S. stock markets and hampering the Chinese economy enough to make Beijing bend on the ongoing trade dispute.

Reports from both sides had indicated progress in the drawn-out negotiations toward a trade deal — with an agreement even possible this week. But in a surprise move, Trump tweeted Sunday local time that tariffs on $200 billion worth of Chinese goods would increase to 25% on Friday. He added that a 25% tariff would “shortly” be imposed on an additional $325 billion of imported goods from China.

“The Trade Deal with China continues, but too slowly, as they attempt to renegotiate. No!” Trump said in a tweet.

Dow futures dropped more than 450 points after Trump’s tariff threat and reports, including one from CNBC, that the Chinese were considering canceling trade talks that had been scheduled for this week.

Chinese markets, meanwhile, tanked more than 5% on Monday, but that’s unlikely to be enough to shake Beijing’s resolve.

“Trump’s latest move increases his economic leverage but will not lead China to surrender on his terms, ” Michael Hirson, practice head, China and Northeast Asia, at consulting and research firm Eurasia Group, said in an email.

“China’s political cohesion gives Beijing an important asset in withstanding the pressure from Trump, and employing economic measures to keep up growth and support weak points in the economy,” Hirson said. “But there is no question that Beijing’s challenge just got much more difficult.”

Official Chinese channels were quiet Monday morning. Chinese state media was muted on the latest Trump tweets. The Ministry of Commerce and Ministry of Foreign Affairs referred CNBC to their regular press conferences, set for Thursday and Monday afternoon, respectively.

A tariff increase on the $200 billion figure would be a delayed implementation of a raise planned for earlier this year. They would have a moderate impact on China’s economy, of about 0.2 to 0.3 percentage points, according to Nick Marro, Hong Kong-based analyst at The Economist Intelligence Unit.

On the other hand, a 25% tariff on $325 billion would put duties on virtually all goods China exports to the U.S. Such a broad application of tariffs — and expected retaliatory duties from Beijing — could hit China’s headline gross domestic product by at least 0.3 or 0.4 percentage points, slowing growth to 6% or less, Marro said in a phone interview.

“In the case that the US imposes 25% tariffs on all Chinese exports, it would be very difficult for China to keep its GDP growth above 6% even with more policy stimulus, and the CNY may weaken to 7.2 vs USD,” they said in a Monday report. “In the case that tariff escalation stops at 25% tariffs on $250bn Chinese goods, China’ growth could still be around 6% this year.”

That would bring unwanted pressure on China, just as Beijing is trying to keep the economy stable.

Official figures showed that national GDP grew at 6.6% last year, the slowest since 1990. In an annual address to delegates in March, Premier Li Keqiang said this year’s growth target range would be even slower, at 6% to 6.5%, and said the country must be prepared for a “tough struggle” ahead.

Authorities have been trying to stimulate the economy by making it easier for privately run, smaller businesses to get loans. While it’s unclear how effective those policies are, official data showed first-quarter GDP came in slightly better than expected at 6.4%. Figures for retail sales and industrial production also topped expectations.

“We have been highlighting that as the Chinese economy stabilizes, China would be less willing to provide additional concessions to the US,” Citi Global Economist Cesar Rojas said in a note.

“We have also noted that the administration pays attention to US equity markets, and that negative tweets on US-China trade are associated with an outperformance of US equity prices relative to Chinese equities,” Rojas said. “A negative reaction in equity markets after this announcement could see the US administration retreating from implementing the tariffs threat.”

U.S. stocks have rallied this year, with the benchmark S&P 500 hitting an intraday record last week and the Nasdaq composite closing at a record on Friday. The latest jobs report showed robust American hiring and a fall in unemployment to its lowest since 1969. The initial read on first-quarter GDP showed the U.S. economy grew at a far greater-than-expected 3.2 percent rate.

“Encouraged by a strong US economy, Trump is now ready to bring that leverage to bear at a critical time and will almost certainly follow through on his threat this week,” Hirson added in a note to clients. “It would take a desperate move by Beijing to prevent it, which we believe is not forthcoming.”

Analysts are watching whether Liu He, China’s chief negotiator on trade, will make a planned trip to the U.S. this week for further negotiations.

“The greatest risk here will be political. China won’t want to be seen as under duress … responding to anything Trump says on Twitter,” Marro said. “China would prefer those negotiations remain on more even terms, structured, not via Twitter.”

As for the economy, the People’s Bank of China announced Monday morning a targeted cut to its reserve requirement ratio for small and medium-sized banks, effective May 15. The release said the new policy is expected to release about 280 billion yuan ($41.6 billion) in long-term financing for privately run small and micro-sized enterprises.

“The Chinese economy did surprisingly well in March, triggering a further rise of stock prices in the first four weeks of April as most March data were released around mid-April,” Nomura economist Ting Lu and his team said in a Monday note. “The decision to announce the targeted RRR cut today was very likely made to offset the negative impact of the sudden shift in US-China trade talks.”

“We believe a worsening of the trade conflict between the US and China will evoke another dovish turn by Beijing, especially on its monetary easing stance,” the report said.

As the world’s second-largest economy and America’s largest trade partner, the health of the Chinese economy has significant implications for global growth and markets.