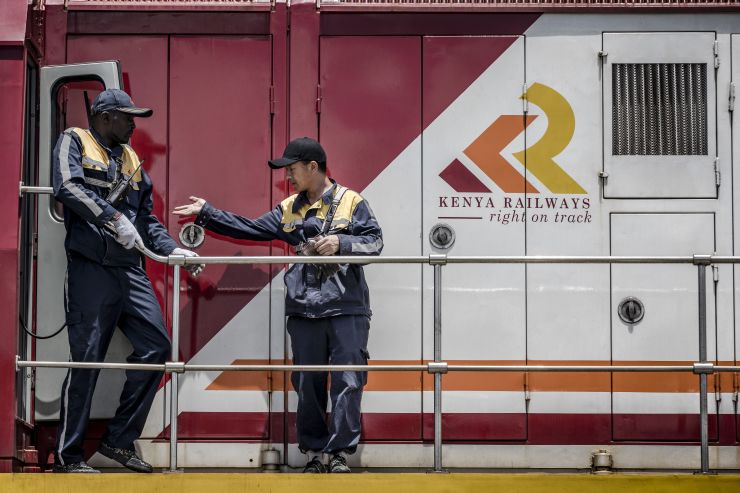 Beijing offered in the last week a nod to criticism about its Belt and Road Initiative saddling other countries with debt while also gaining a partner in one of the world’s financial centers.

Swiss President Ueli Maurer met with Chinese President Xi Jinping on Monday and signed a memorandum of understanding for cooperation on trade, investment and finance for projects in third countries along the routes of Xi’s signature foreign investment program. The central European country has a reputation of being an international leader in banking.

“I think it is helpful that China can engage more European countries for the BRI, ” said Zhu Ning, professor of finance at Tsinghua University in Beijing. “Switzerland would provide very important help to BRI given (the) Swiss’s advantage in global banking and financial services.”

That comes as Beijing seeks to recoup the image of the Belt and Road, which has been tarnished by criticism it’s a vehicle for “debt-trap diplomacy.”

“The accumulating debt involved in the BRI has prompted China to think more carefully about the sustainability of the BRI projects and how to combine the power of the state and the market to make it work, for Chinese and global participants,” Zhu said. “This becomes an even more important and pressing issue given that RMB internationalization process is not going as fast as a few years ago and it will post some challenges to China’s currently mighty foreign reserve. ”

The Belt and Road Initiative is widely seen as Beijing’s effort to increase global influence, beginning with the construction of rail, sea and other transportation routes stretching from central Asia to Africa. The projects can provide needed infrastructure. But critics say Chinese companies, often state-owned, tend to benefit more since they are usually the contractors or providers of financing.

That puts China in control of overseas assets if a country can’t pay back its loans. Earlier this month, U.S. Secretary of State Michael Pompeo called some of China’s lending practices with other countries “predatory.”

The U.S. and India, another country critical of the Chinese-led program, did not send official representatives to the second Belt and Road forum that concluded in Beijing this past weekend. Thirty-seven national leaders attended the event, including Russian President Vladimir Putin and Italian Prime Minister Giuseppe Conte.

Xi used his opening speech to acknowledge some of program’s shortcomings in its first six years of existence. Analysts also noted that he did not make any pronouncements on China’s financial commitment to Belt and Road.

“We need to pursue high standard cooperation to improve people’s lives and promote sustainable development,” Xi said, according to an official English translation of his Mandarin Chinese remarks. “We also need to ensure the commercial and fiscal sustainability of all projects so that they will achieve the intended goals as planned.”

A day before Xi’s speech, China’s Ministry of Finance released a “Debt Sustainability Framework for Participating Countries of the Belt and Road Initiative.” The document provides optional guidelines for making loans and a mathematical formula for determining a country’s ability to handle debt.

Marie Diron, managing director at Sovereign Risk Group, Moody’s Investors Service, said in an emailed statement on Friday that the framework is “comprehensive” and is based on principles similar to what other institutions use for trying to ensure a level of debt isn’t excessive.

“Applied effectively, it may help reduce the financial stability risks that some borrowing countries face from the additional debt burden incurred from Belt and Road projects,” Diron said. “The framework’s effectiveness will depend on how widely it is applied, since it is not a mandatory tool, the borrowing governments’ capacity to provide the necessary inputs to the debt sustainability analysis and the lending banks’ use of the tool in their decisions.”

Chinese financial institutions have provided more than $440 billion in fundingfor Belt and Road projects, People’s Bank of China Governor Yi Gang said during a talk at the forum, according to an English-language release on Chinese state media.

“A country’s overall debt capacity should be taken into account as a way to control debt risks and ensure sustainability of debt when it comes to the investment decisions,” Yi said. He added that future financing and investment cooperation should be market-oriented and mostly from commercial funds.

The agreement Switzerland signed is technically between the country’s federal departments of finance and economic affairs, education and research, and China’s National Development and Reform Commission. The memorandum lists initiatives to connect Swiss, Chinese and third-party leaders to create business deals and establish a “Belt and Road Initiative competence-building platform” in Switzerland.

“Cooperation will be based on five key principles: private capital for private projects, sustainable handling of debts, consideration of social impacts, environmental protection criteria, and transparency,” according to a press release from the Swiss embassy.

A representative did not immediately respond to a CNBC request for further comment on the agreement.

Still, it remains to be seen whether complaints about the Belt and Road’s debt deals recede.

“While it is encouraging that Chinese officials are talking more openly about prioritizing debt sustainability and environmental sustainability, real change will require more than signing symbolic documents,” Jonathan Hillman, senior fellow and director of the Reconnecting Asia Project at the Center for Strategic and International Studies, said in an email over the weekend.

“For example, rather than launching a vague ‘Clean Silk Road’ initiative, China could make the terms of its deals public.”