Stop the fixation on China trade. Investors should be watching US exports to Europe 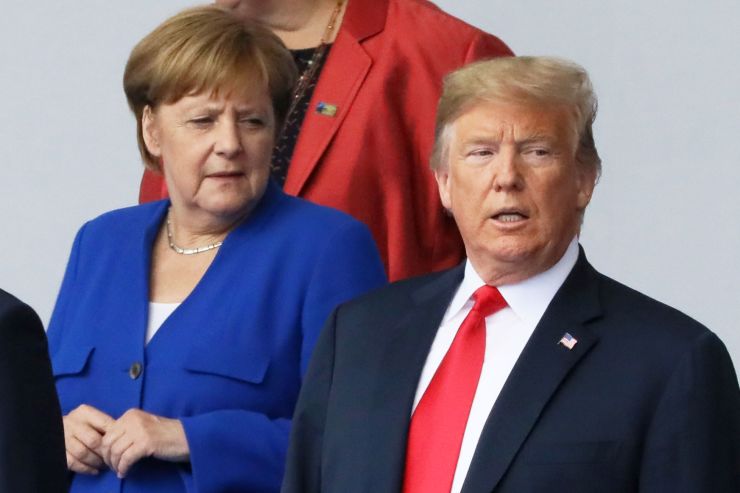 Washington’s lack of attention to European affairs is a costly mistake. Germany’s refusal to reflate its economy and support the continent’s growth is killing the market where the U.S. sold $63.4 billion worth of goods in the first two months of this year — one-fourth of all U.S. goods sales abroad.

That compares with a pitiful $15.6 billion of American exports to China during the same interval. And those sales were down a whopping 20.4 percent from the first two months of last year.

The U.S. is wasting time trying to reform China’s economy. It is about time for Washington to realize that China — as befits a great power — will do its own thing, on its own terms and in its own time. China’s structural reforms should be driven through the World Trade Organization, the International Monetary Fund and, all else failing, through bilateral trade instruments.

Washington’s priority should be to rapidly balance its trade accounts with China. It’s very early days to say that progress is being made, but a 9.2 percent decline in Beijing’s trade surplus with the U.S. in the first two months of this year could be a good beginning.

China should quickly get out of the huge U.S. trade problem it created for itself. Beijing does not need that debilitating liability while it is trying to manage the issues of Taiwan, Tibet, contested maritime borders in the South China Sea, the explosive mix on the Korean Peninsula, a strategic China-Japan-Korea triangle and a sprawling “Belt and Road” global infrastructure investment initiative.

The U.S., for its part, does not derive any strategic leverage from the trade scuffle with China. It’s just noise and distraction from a firm grip Washington should keep on a vitally important trans-Atlantic alliance. That’s where America finds a hugely important contribution to its jobs and incomes and the support it needs to maintain the West’s world order.

The present U.S. administration will rue the day when it started its mindless demolition of the alliance with petty nickels-and-dimes taunts and rips at European unity, a project bringing peace and prosperity to a continent that lit up the world twice last century.

America’s Congress made a significant step toward repairing that damage with a recent invitation to the NATO secretary general to address the joint session of U.S. lawmakers on the Capitol Hill. The next person Congress might wish to invite should be German President Frank-Walter Steinmeier, a thoughtful statesman, a passionate European and a thoroughly devoted advocate of trans-Atlantic unity.

The symbolism of such a gesture would go a long way toward healing the regrettable and totally senseless estrangement of the U.S. and Germany — the two most important Western allies.

And the sooner that is done, the better it will be to diffuse a looming trans-Atlantic trade confrontation in the wake of seemingly unbridgeable disagreements about the Iranian nuclear accord, the Middle-East peace process and relations with China and Russia.

It is in such a political context that one has to view Germany’s capricious resistance to an obvious and urgent need to reverse the cyclical downturn in the euro area, and in the rest of the European Union.

That attitude comes at a time when the German government recently downgraded its own economic growth for this year to 0.5 percent from a 1 percent forecast announced last January.

The Germans argue that’s none of their fault. They say it’s all a matter of Washington’s trade wars and policies undermining world peace and security.

Distracted by China trade, the U.S. economic and political officials had nothing to say to counter that widely shared view during last week’s IMF-World Bank spring session in Washington, D.C.

Germany, as a result, got off scot-free because the prevailing opinion held that Berlin, or anybody else, could not prevent a decline of the world economy while the U.S. continued to undermine the world order resting on a multilateral trading system and a peaceful resolution of global hot spots.

Still, to deflect any further pressures, Germany’s finance minister promised 10 billion euro in annual tax cuts and incentives to boost research and development investments by 1.25 billion euro — a hypothetical total amounting to a derisory 0.3 percent of German GDP supposed to bring the country back to a 1.5 percent growth in 2020.

That’s ridiculous. Washington should talk with the Germans to come up with a credible plan of relaunching the EU economy. Otherwise, Berlin will be under relentless pressure to move during the next G-20 summit — the world’s key economic forum — in Osaka, Japan on June 28 and 29. Berlin’s long-suffering friends like France and Italy should join in, along with the International Monetary Fund and the Organization for the Economic Cooperation and Development.

It would be a great pity if Germany continued to blunder with blatantly bad faith nonsense. Indeed, how could a $3.8 trillion economy, presently sliding into an estimated 0.5 percent growth recession, swiftly recover to a 1.5 percent upturn next year on the strength of a puny 0.3 percent of GDP (hypothetical) fiscal stimulus?

It is clear that Germany counts on its export-led growth, driven by a strong fiscal expansion in France (by far Berlin’s largest European export market of 105.3 billion euro), strong U.S. growth (Germany’s largest 113.3 billion euro export market) and an apparently privileged access to China, where German exports ran at an annual rate of 90 billion euro in the first two months of this year.

The U.S. should stop its efforts to reform China’s economy and insist instead on a rapid reduction of its huge deficits on China trades.

Opening up a new trade front with the EU would be an unwise move. Washington should opt for an amicable settlement among close friends and allies.

A restoration of good and confident ties with Germany is an essential step to achieving that objective. That would also open the way to Germany’s strong support to Europe’s economic growth — a market that takes a quarter of U.S. exports and plays a crucially important role in managing the allied economic, political and security relations with the rest of the world.

With the Russia collusion probe out of the way, and the re-election campaign heating up, the White House has everything to gain by strengthening the trans-Atlantic alliance and reaffirming the West’s world order.