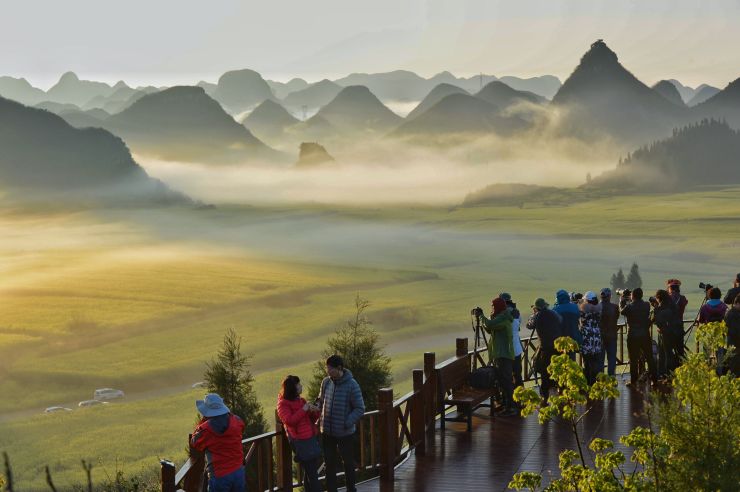 Beneath the gloom overhanging China’s economy, some big companies are finding growth opportunities in smaller cities outside Beijing and Shanghai.

Earnings and analyst reports released in the last few weeks indicate there are still many areas of untapped potential in the world’s second-largest economy.

In particular, five industries present prospects for growth: Internet, autos, healthcare, education and tourism. Much of the growth for companies in these markets comes from smaller cities and county districts, which analysts say account for more than 70 percent of China’s population.

“In our big picture now, these so-called lower-tier cities, they will be basically the major driver of growth in China in the next 10 to 15 years,” Robin Xing, chief China economist at Morgan Stanley, said in a phone interview Thursday.

China’s cities are separated into tiers based loosely on population and economic size. For example, Beijing, Shanghai, Shenzhen and Guangzhou are generally considered tier-one cities, while lower-tier cities are smaller.

Xing said his expectations for growth in less developed parts of China are based on the government’s push to develop city clusters, bringing the services and productivity levels of big cities within closer reach of the roughly 600 million people living in rural China.

He also pointed out that his growth predictions are based on the assumption that the Chinese government will follow through on reforms regarding benefits from residency permits known as “hukou,” as well as grant greater access to foreign firms.

Last year, growth in consumer goods sales slowed to 2.7 percent in Beijing and 7.9 percent in Shanghai, but grew at 10 percent or more in relatively less developed provinces such as Anhui, Yunnan, Hubei, Fujian and Shaanxi. That’s according to official figures accessed through the Wind Information database.

It’s unlikely stronger growth in such regions can significantly offset a nationwide slowdown.

But at least for now, companies operating in China’s less developed areas provide a glimpse into some pockets of growth.

Here are a few areas of potential that some analysts are watching:

“Despite a high base of internet users in China, rural areas are creating incremental growth opportunities,” Credit Suisse analysts said in a March 18 report titled “China’s Unicorns: Preparing to gallop.”

“It is worth noting that mobile payment penetration rose from 50.3% to 65.5% over 2017, with most new users coming from rural areas,” the report said, adding people are spending close to five hours a day on mobile internet.

One of the most prominent examples of a company tapping into rural China’s growth is Pinduoduo. Few in the country’s big cities had heard of the e-commerce company until it raised $1.6 billion in an IPO on the Nasdaq last summer. The firm is best known for its group buying offers, that allow products to be sold cheaply in bulk, directly from the manufacturer or farmer.

On March 13, Pinduoduo reported 418.5 million users made at least one order through the platform last year, with average spending up by 95 percent from a year ago to 1,126.9 yuan ($163.90). Total revenues grew 652 percent to 13.1 billion yuan, but total cost of revenues quadrupled to 2.9 billion yuan. The company has been hit by allegations of selling counterfeit goods.

“While PDD’s cash burn and marketing costs rose tremendously, I believe the stock is apt to find buyers at this price level as finding a company with this level of growth is very difficult,” Brendan Ahern, chief investment officer at KraneShares, a New York-based firm that sells exchange-traded funds tracking Chinese stocks, said in an email on March 19.

Another internet company that has tapped growth in China’s less-developed areas is Kuaishou, a Tencent-backed app for streaming short videos.

Founded in 2011, Kuaishou said it has more than 160 million daily active users. In particular, the firm claims that one out of every five people in China’s 832 poverty-stricken counties and special regions, is an active user of its app. Some content has come under fire for being vulgar, but other videos showcase local creativity — one video of live chickens arranged in the shape of the Chinese character for “blessing” garnered more than 620,000 likes.

The app has also become an e-commerce platform, with about 1.15 million users from very poor areas notching sales of 19.3 billion yuan last year, according to the company.

It’s not clear how large Kuaishou has grown, but reports from the latter part of last year indicate a valuation of $18 billion to $25 billion.

The government used to restrict sales of used cars between different cities if the vehicles didn’t meet certain emissions requirements, but those constraints began to be removed in the last three years, according to the Credit Suisse report.

“The cross-regional flow of used vehicles certainly boosted circulation, especially when most of them are owned by residents in tier 1 and 2 cities, but demand largely comes from people in small cities,” the analysts said.

The interest in secondhand cars has spawned some online sales platforms, such as Guazi and Uxin, with valuations in the billions of U.S. dollars.

Uxin went public on the Nasdaq last year and has a valuation of just over $1 billion. The used car e-commerce platform reported on March 14 that total revenues for the full year of 2018 rose 69.9 percent to 3.3 billion yuan.

More than half of the cities Uxin operates in fall into the so-called tier-three and -four designation, according to CEO Dai Kun. In an interview with CNBC, he said secondhand cars are an attractive choice for people in smaller cities since they often lack a metro system and local incomes tend to be lower.

Looking ahead to the rest of the year, Dai plans further expansion into hundreds of cities and counties. He expects the economy to pick up and that the year-on-year decline in sales of new autos will end.

Improving the quality of life through better healthcare, education and other services is part of the opportunity in smaller cities, said Qin Gang, deputy secretary general at think tank Center for China and Globalization.

“In the last twenty years, development focused on high tier cities,” he said in a Mandarin-language interview translated by CNBC. “The lower tier cities were neglected, ignored for a long time.”

For the last several decades, that meant people crowded Beijing and Shanghai to see the best doctors and find the best schools. Technology is trying to change that.

Through a smartphone app, Ping An Good Doctor lets customers connect with doctors for consultations, order medicine and find recommendations for a nearby clinic or hospital if further examinations are needed. The process removes the hassle of waiting in hours-long lines just to see a doctor or pick up a prescription, and also encourages locals to try regional services.

A basic consultation can start at several hundred yuan, or about $65 and up. For 2018, Ping An Good Doctor claimed to have more than 265 million registered users and 54.7 million monthly active users. The company reported a 78.7 percent growth in revenue last year to 3.34 billion yuan, but posted an operating loss of 1.15 billion yuan.

China has one of the highest consumption demands for education in the world, Morgan Stanley analysts noted in a March 25 report. They expect the national education market to double to 10 trillion yuan by 2028, driven partly by spending growth in lower tier cities.

In a survey of parents from September to October last year, Morgan Stanley’s AlphaWise research arm found demand for spending on after-school education in lower tier cities was just as strong as other parts of the country. That’s despite households having less disposable income.

In its earnings report for 2018, Ctrip said that stays at its branded low-star hotels doubled from the prior year. Net revenue for the full year rose 16 percent to 31 billion yuan.

Tourism spending could increase if there was better implementation of the paid-leave system, UBS analyst Xin Chen said in a March 25 note. He pointed out that Chinese residents overall have 24 to 36 percent less leisure time than those in developed countries, with lower tier city residents on average taking about two fewer days off than those in tier-one and tier-two cities.