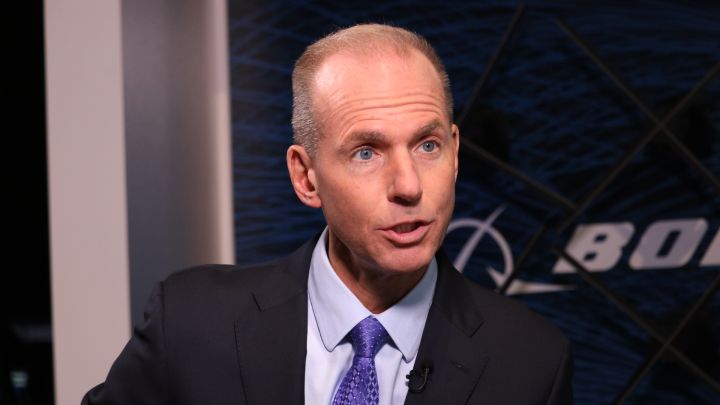 Boeing shares are soaring to begin 2019, rising to an all-time high a few days after the company reported booming fourth-quarter results and gave shareholders even greater confidence in the company’s prospects in China’s nearly insatiable aviation market.

The aerospace giant is ramping production to fulfill its backlog of 5,900 aircraft orders, which “equates to about seven years of production at current rates,” CEO Dennis Muilenburg told shareholders during the company’s quarterly conference call. Boeing broke its airplane production record last year, churning out 806. But Boeing expects to shatter that record by nearly triple digits and produce at least 895 next year.

In other words, Boeing aims to produce airplanes at a blistering rate of one every 9 hours and 45 minutes in 2019.

“It appears things are just heating up,” Jefferies analyst Sheila Kahyaoglu wrote in a note to investors about Boeing on Sunday.

Boeing’s stock hit $394.90 a share on Monday, breaking above the previous high of $394.28 a share hit on Oct. 3. Shares are off to a red-hot start this year, up over 21 percent. Boeing’s stock was climbing steadily last year until the last three months more than cut the company’s year-to-date gains in half. Fears of a slowing global economy led by China helped knock stocks all down. But Boeing still finished 2018 up 9.4 percent.

Boeing’s stock over the last 5 years 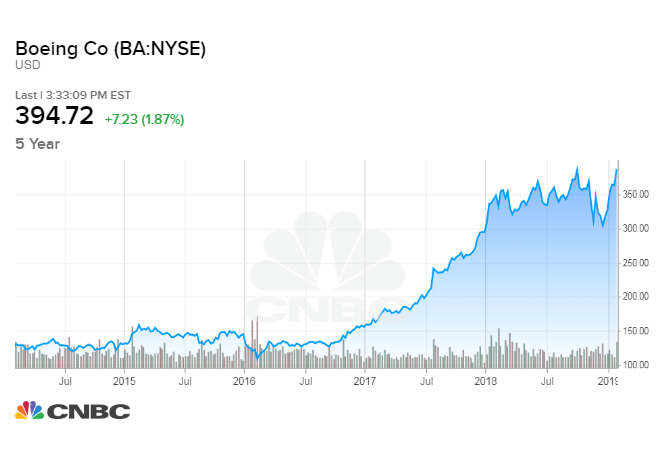 Moreover, the stock has finished positive every year since Boeing appointed Muilenburg as CEO in July 2015. Muilenburg has been with Boeing since 1985, when he joined as an intern. His tenure has thus far been defined by “One Boeing,” a push to make the company a more cohesive whole across its three business units. Muilenburg credits that initiative with helping Boeing realize $101.1 billion in annual revenue last year – breaking the $100 billion mark for the first time.

Sales to China plays a key role in Boeing’s future and Muilenburg said he sees “strong demand in China overall.” Boeing estimates China makes up about 18 percent of the world’s demand for new commercial airplanes over the next two decades. That translates to about 7,700 airplanes solely for Chinese customers.

Chinese customers make up about a third of Boeing’s orders for its core 737 aircraft, according to Jefferies. While President Donald Trump’s trade war with China may not have been the the sole catalyst for Boeing’s stock decline, Muilenburg assured shareholders last week, saying the company has “the ability to weather” any short-term issues.

“I can tell you – having been intimately involved in the discussions and engagement with the governments both in the U.S. and China – we see progress on that front,” Muilenburg said of the trade negotiations. “We see convergence, and we also see that there’s clearly a mutual benefit to having a healthy aerospace industry for both the U.S. and China.”

China’s broader economy may be slowing, but its aviation market is booming and is set to become the world’s largest in just a few years as a rising consumer class spends more on travel.

The International Air Transport Association forecast in October that the country will overtake the United States as the world’s biggest market in terms of traffic to, from and within the country in the middle of the next decade.

“The rebalancing of China’s economy towards consumption will support strong passenger demand over the long term,” it said.

IATA sees China adding one billion new passengers during the period 2017-2037, for a total of 1.6 billion. Rob Koepp, who follows China for the Economist Corporate Network in Hong Kong, said that both Boeing and rival Airbus are in a “sweet spot” in China given their market dominance for aircraft spurred by the increasing aspirations of the country’s consumers.

“They’re wanting a better lifestyle that includes the opportunity to travel,” Koepp told CNBC on Thursday.

As a sign of that rising demand, airport construction has boomed. The city of Beijing is set to open a second international airport later this year. In its commercial market outlook published in September, Boeing cited China’s increasing urbanization and growing middle class as factors boosting travel demand.

“China needs the airplanes for growth to fuel their economy and to meet their passenger growth and cargo growth needs,” Muilenburg said.

“That’s at the heart of it, economic development,” Harbison told CNBC on Thursday.

According to the CAPA Fleet Database, Boeing and Airbus dominate the market in China, accounting for a combined 92.5 percent of aircraft in service. Boeing stands at 47.2 percent and Airbus at 45.3 percent, the latest figures show.