Brexit explained: Here’s where we stand and what could happen next 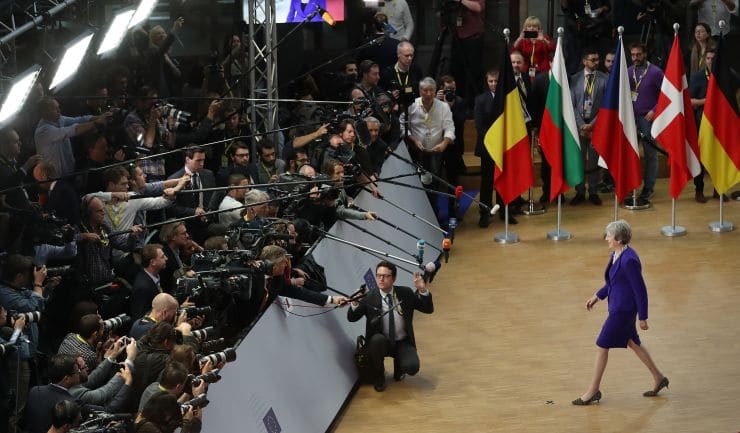 Britain is scheduled to leave the European Union at the end of March but, as the country’s deadline for departure creeps ever closer, what will actually happen on that day remains far from certain.

Embattled Prime Minister Theresa May is struggling to overcome deep opposition to her proposed Brexit plan, opening up a range of possibilities from Brexit without a trade deal to the whole process being scrapped altogether.

With less than 85 days to go until the U.K. is due to end its four-decade-long membership of the EU on March 29, CNBC takes a look at what to expect over the coming weeks.
What are the most likely options?

British lawmakers will resume debating May’s proposed Brexit deal on Tuesday, with a vote due to take place the following week.

Westminster must decide whether to accept May’s plans for a structured exit and relatively close economic ties, or reject it and spawn massive uncertainty over the country’s next steps.

Sterling has fallen more than 11 percent against the U.S. dollar since reaching a peak of $1.4335 in April 2018, in part due to rising fears over the course of the Brexit process. The U.K. currency was trading at around $1.2660 Friday morning.

The prime minister abruptly postponed a planned vote on her draft withdrawal agreement in December, after admitting defeat was all but certain.

Since then, in an effort to win enough support from lawmakers across the political spectrum, May has sought “legal and political” assurances from EU leaders — most notably on the so-called ‘backstop’ arrangement for the Irish border.

So far, there has been little sign of any willingness from Brussels to offer May the legal cover she has been seeking.

Some of the most likely options include: May’s vote securing parliamentary approval, no-deal Brexit, a major renegotiation to a new Brexit deal, calls for a general election, a vote of no confidence in the government or another referendum.

Parliamentary opposition to May’s deal still looks daunting, but the prime minister appears hopeful some headway with EU leaders could make it easier to get the Democratic Unionist Party (DUP) on side.

Support from the DUP is critical to May, because the party formed a power-sharing agreement with the prime minister in order to form a minority government after a snap election in 2017.

Arlene Foster, the head of the Northern Irish party has said she would prefer no Brexit deal to a bad deal, previously describing May’s current plans as amounting to “the annexation of Northern Ireland” by the EU.

If May’s proposed Brexit deal is rejected and nothing else happens over the coming weeks, the default position would be a no-deal Brexit.

Such a scenario could send the U.K. currency sharply lower and trigger a worse recession than the financial crisis, the Bank of England (BOE) warned in November.

The BOE also said it could shrink the U.K. economy by 8 percent in the immediate aftermath if there was no transition period, while house prices could collapse by almost a third.

Renegotiation to a new Brexit deal

If May’s Brexit deal is rejected by lawmakers this month, the government could propose to negotiate a new withdrawal arrangement.

With a parliamentary vote necessary to sign off on any future clarifications from London and Brussels, minor tweaks to the current deal seem unlikely with time running out before the U.K. is set to leave the bloc.

May has repeatedly insisted the alternative to her proposed Brexit deal is not having a deal at all. Jean-Claude Juncker, the European commission president, has also frequently said there is “no room whatsoever” to renegotiate the Brexit deal.

In theory, there could be a complete overhaul but that would take some time to complete.

It may also require an extension of Article 50 to push back the March 29 deadline. That is no simple task either — all EU countries would need to agree to a deadline extension at a vote of the EU council.

In order to bolster her political mandate, May could decide the best way to break the current deadlock would be to hold an early general election.

This would require Westminster to vote for an early election under the Fixed Term Parliaments Act and if two-thirds of all lawmakers supported the idea, the earliest date for a vote would be around 25 days after that.

As with the renegotiate option, it could also require a request to push back the current Brexit deadline.

Vote of no confidence

If May’s proposed Brexit deal is rejected, the opposition Labour Party could push for a vote of no confidence in the government. The prime minister could also theoretically do so herself in a somewhat dramatic bid to reassert her authority.

If a no confidence vote in the government is tabled, May’s administration would need to win the vote — potentially by offering some new concessions — within a 14-day period in order to carry on.

The U.K. government could decide to hold a second referendum.

But this cannot just happen automatically, and with the Brexit deadline drawing ever nearer, the referendum would almost certainly be unable to take place before March 29.

Therefore, this option would also most likely need the permission from other EU states to delay the current Brexit deadline.

At the start of December, the European Court of Justice ruled Britain could cancel Brexit without asking for permission from other European Union (EU) member states.

The case was brought by a group of Scottish lawmakers who sought a legal ruling on whether the U.K.’s request under Article 50 to leave the EU could be unilaterally revoked before the Brexit deadline of March 29, 2019.

The House of Commons would still need to vote to stop Article 50 but those against Brexit can highlight that, beyond Westminster, there is now no legal impediment to stopping the divorce.