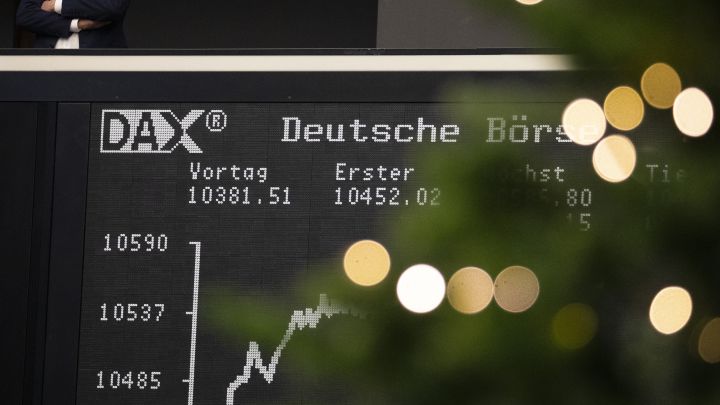 The German DAX has had its worst year in a decade amid persistent market volatility across the globe. The stock index is down more than 18 percent since the start of the year, after it briefly fell into bear market territory earlier this month.

A bear market is when stocks see a 20 percent decline or more from a recent high — but they’re also marked by overall pessimism. 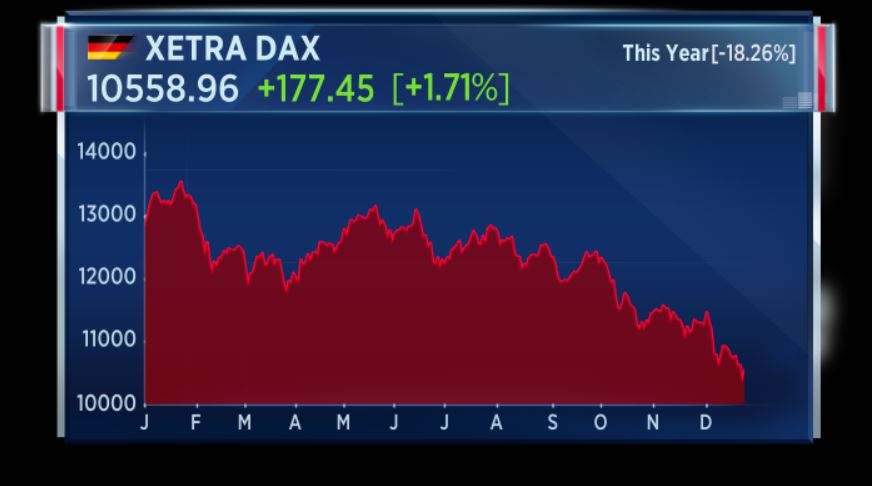 Holger Schmieding, chief economist at Berenberg, told CNBC via email on Monday that the underperformance of the DAX has nothing to do with the German economy.

“It can largely be explained by three factors: Most importantly, German companies are very outward looking. As exporters of mostly highly cyclical goods such as cars and machine tools, they react more strongly to a loss of momentum in the global economic cycle,” Schmieding said.

“Second, the peculiarities of the German banking sector with its myriad of non-listed public and semi-public banks and the weaker listed banks shows up in the DAX. Third, the German car sector is facing specific issues mostly related to tougher environmental standards and a belated shift to e-mobility.”

The German DAX consists of 30 stocks and has a market cap of more than 1 trillion euros ($1.14 trillion). It spans across sectors such as basic materials, technology, utilities, health care and financials among others.

According to data from Reuters, a wide range of companies that form the DAX index have seen their stock fall by dramatic numbers. Deutsche Banktops the list of worst-performing names in the index, down by more than 56 percent year to date. Germany’s largest lender has a market cap of more than 14 billion euros. However, both Deutsche Bank and Commerzbank have been struggling with the shrinking size of their businesses and the constant pressure to restructure.

The German index has been following the global stock sell-off triggered by a number of factors such as geopolitical tensions on the back of the U.S.-China trade standoff, uncertainty surrounding Brexit and monetary policy tightening from the U.S. Federal Reserve.

The DAX features several companies which generate a significant portion of revenue from around the world, leaving them exposed to trade uncertainty.

The big three German automakers — Daimler, Volkswagen and BMW — have all dropped more than 20 percent from their late-January highs. Daimler, the parent company of Mercedes-Benz, has been the worst performer, down 35.2 percent since the start of the year. And, during the past four months, both Daimler and BMW have issued profit warnings, blaming the prospect of new tariffs and new emissions tests for weakening demand and declines in car production. According to brokerage Bernstein, German carmakers made at least 40 percent of their profits last year in China.

The German auto industry accounts for roughly 8 percent of the country’s GDP, and these mounting corporate profit warnings have put added pressure on a German economy that has been reeling. German GDP fell in the third quarter, its first contraction since 2015, partly driven by the aforementioned emissions testing. The decline is also symptomatic of a string of warning signs over the past two months.

In addition to global uncertainties impacting the German economy, there is also the added challenge of the political situation in Berlin with Chancellor Angela Merkel’s term coming to an end soon.

Merkel said in October that she would not be running for re-election as chairwoman of the ruling conservative Christian Democratic Union. She also confirmed that this, her fourth term, would be her last and she would not be seeking any political post after 2021.

Her announcement opened a leadership race for both the CDU and the ultimate prize (and responsibility) — leading Europe’s largest economy and most influential political entity. Annegret Kramp-Karrenbauer, Merkel’s close ally, was later elected to lead the party. However, uncertainties continue to plague investors over the course of leadership and what it means for the economy.