Job openings back over 7 million and near a record high 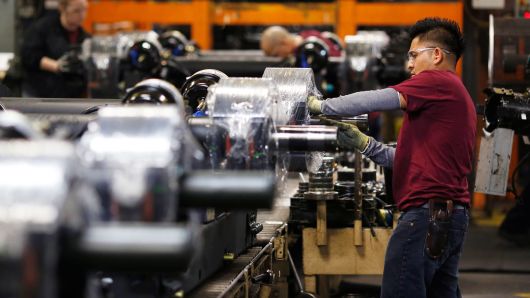 There were 1 million more jobs than unemployed workers in the most recent government count of job openings, according to a Labor Department release Monday.

Total available jobs stood at 7.08 million for October, the second-highest level surpassed only by the 7.3 million in August, the Job Openings and Labor Turnover Survey showed. By comparison, there were just 6.08 million Americans classified as unemployed for the month.

The survey shows a tightening jobs market at a time when questions are arising over the broader economy’s strength. Most economists are expecting a global slowdown that could infect the U.S., which is coming off its strongest year since the Great Recession ended in mid-2009.

The amount of openings was more than 1 million higher than the same period a year ago, a 16.8 percent increase. The labor pool, though, continues to shrink, with the current unemployed level down 449,000 from October 2017, a 6.9 percent decline. November saw another decline, to 5.98 million; JOLTS numbers only extend through October.

The number of hires also was robust at just shy of 6 million, coming within 14,000 of the series high set in August. Hires rose 3.4 percent over the previous month and 5.2 percent from the same month a year ago.

Another key indicator, the quits level, declined some in October.

Those voluntarily leaving jobs — a key indicator of worker confidence — declined by 50,000 to 3.51 million. The quits rate as a percentage of the workforce nudged lower from 2.3 percent, but it was still higher than the 2.2 percent of a year ago.

Most other indicators were little changed.