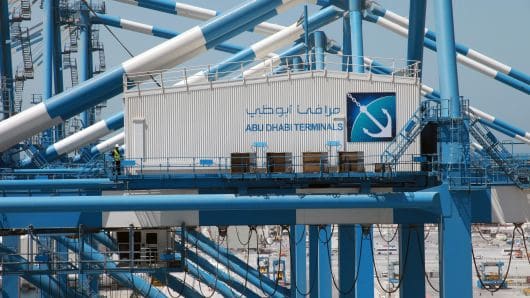 The CEO of Abu Dhabi Ports said that the company remains “good allies of all countries” as it embarks on an agreement that will see its flagship port become a hub in China’s wide-reaching “belt and road” initiative.

Mohamed Al Shamisi told CNBC’s Dan Murphy over the weekend that his business was “not at all” affected by the ongoing trade war between the U.S. and China. He said he expects the tie-up with China’s largest shipping group to provide boon to global trade.

“We are good allies of all of the countries,” said Al Shamisi, who added that he sees a “huge” import and export potential for the region.

The belt and road initiative is a vast project designed to link China with much of Asia, Europe the Middle East and Africa, and to increase Beijing’s political and trade influence globally.

The port, which is situated halfway between Abu Dhabi and Dubai, now serves over 25 shipping lines and has links to 70 international destinations. Al Shamisi said that makes it a “strategic location” for trade, not only within the United Arab Emirates and the Middle East, but the wider ecosystem.

“It’s huge … We are not serving the Middle East per se, but we are serving the North Africa Indian subcontinent and we are transitioning point to all of these destinations,” said Al Shamisi.

The agreement comes at a time when commentators, not least U.S. President Donald Trump, have questioned China’s growing influence over other countries.

Al Shamisi said the deal will help bolster Abu Dhabi Port’s ambitions to increase its capacity, but he said it would also create opportunities from foreign direct investment from other nations.

“We see big potential of foreign direct investment especially having Cosco by our side, which will connect all of these industries to the world,” he said.

Zhang Wei, vice chairman and managing director of Cosco Shipping Ports, also said that growing demand from Chinese consumers would provide a “long-term growth base” for the partnership, even amid ongoing uncertainties between the world’s two largest economies.

However, he called for the leaders of the two countries to work closely to rebuild ties and hammer out a deal following their meeting at the G20 last weekend.

“I think the U.S. and the Chinese so much rely on each other, and the two leaders will be smart enough to get this deal done,” said Zhang.

“We do need each other, and the growth of global trade also depends on how that deal can be done. So I’m pretty confident that that a good development will be seen in the next 90 days.”