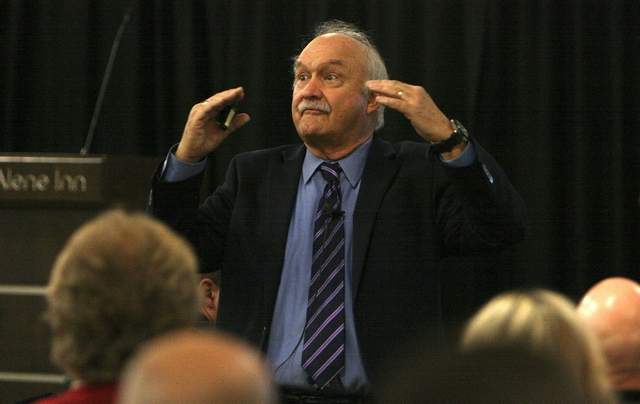 COEUR d’ALENE — If you’re among those who are starting to wonder how long these robust economic times will last, breathe easy.

“2019 looks like another up year, but somewhat slower,” economist John Mitchell said after delivering his forecast to about 150 Coeur d’Alene Chamber of Commerce members on Friday at the Best Western Plus Coeur d’Alene Inn.

Mitchell said he doesn’t see a slight slowdown as a negative.

“It’s OK because we’re going to run out of people (to fill jobs),” he said.

Mitchell said he was stunned to see a New Mexico motel he regularly stays at become “self-service” this year.

“They roll out the cart with sheets and towels and, if you want to change them, you take it off the cart yourself,” he said. “I’ve never seen that before. It shows you how tight it is. They couldn’t find anybody to work. They didn’t change the rate either, which wasn’t right.”

Mitchell titled his forecast “Heading for 11 Amidst Discord and Disruption.”

He was referring to the economy heading into its 11th year of the upturn and situations to ponder that make him feel “cautiously optimistic” heading into 2019.

Mitchell said we are in the 114th month of economic growth.

“There’s only been one other upturn in American history longer — in the 1990s when there were 120 months,” he said. “We’ll be there in June.”

Recent factors to be aware of which could tilt the economic scale include this fall’s financial and stock market turmoil, looming tax changes, a divided government, a shaky world forecast and trade uncertainties.

“The world has changed; there’s a lot of uncertainty around,” he said. “How will people react and behave to that (financial) turmoil?”

Mitchell said most indicators point toward a continued strong economy, but there are just enough questions to keep us on our toes so we shouldn’t become too comfy.

Mitchell said it appears the housing market has plateaued, but he doesn’t expect a collapse to follow anytime soon, either.

“The underlying demand is still strong,” he said.

“With the rising costs of metro areas in the region, people are looking here,” Mitchell said.

The population surge, in turn, is bolstering multiple industries such as construction and health care, he said.

Another chamber member wondered about the impact the aging Baby Boomer generation will have on the labor market.

“I think you’ll see more flexibility (in the job market) and imaginative recruiting,” Mitchell said. “We’re already starting to see that happen. I know a guy who is 74 who is still working.”

Mitchell was referring to himself.

Charlie Nipp, a partner in Parkwood Business Properties, said he appreciates Mitchell for delivering his economic update in an understandable way. Nipp also believes the talk was spot on.

“We are living in exciting times, but there are some question marks to them,” he said. “All of us are feeling a bit cautious. We are very fortunate to be living in a region that’s growing. There are many parts of the world that don’t share that optimism.”

“Change always occurs, but we come out of it stronger in the end,” she said.

Mitchell said an economic dip will inevitably occur, but he doesn’t see that happening in 2019.

“This last year was exciting, and I think the coming year will be an equally exciting time,” Mitchell said.