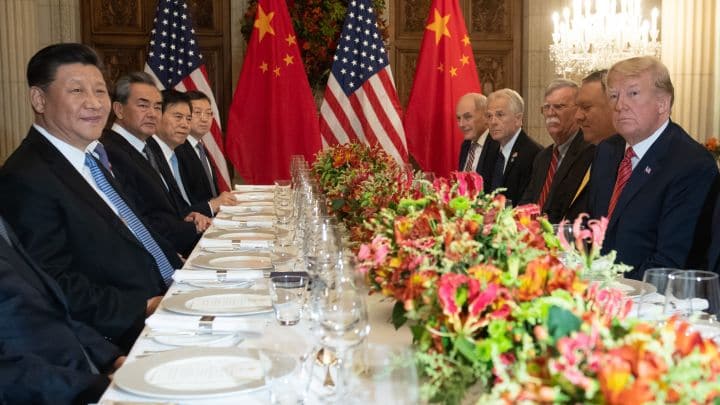 The pan-European Stoxx 600 slipped 1 percent during deals, with the majority of regional sectors trading in negative territory. All major bourses were sharply lower.

Europe’s construction and material stocks were among the worst performers, down more than 1.75 percent amid growing trade war concerns. France’s Saint-Gobain sank over 3 percent after J.P. Morgan cut its stock recommendation to “neutral” from “overweight.” Another industry to lead the losses was insurance, which was down 1.75 percent.

Looking at individual stocks, Britain’s Hargreaves Lansdowntumbled over 4 percent after Morgan Stanley cut its stock recommendation to “underweight” from “equal-weight.” One of the worst performers was French-listed Altran, which sank 7.5 percent after news emerged that the chairman of Altran North America, Frank Kern, would be retiring from his role.

At the other end, drugmaker Shire was among the top performers on Britain’s FTSE 100 index. Japan’s Takeda Pharmaceutical secured shareholder approval to complete a £46 billion ($59 billion) takeover of the company Wednesday morning, prompting shares of Shire to jump over 2.5 percent.

Meantime, house-builders jumped after Barclays banking analysts reportedly said that they saw room for material share price gains by banks and house-builders in Britain — if the Brexit deal passed in parliament, according to Reuters. London listed stocks Berkeley Group, Persimmon, Bellway and Barratt Development all rose more than 5 percent.

Market focus is largely attuned to global trade developments, amid rising doubts that the world’s two largest economies will be able to secure a comprehensive trade deal during a cease-fire on tariffs.

The U.S. and China agreed to temporarily hold off on imposing additional charges against each other’s goods over the weekend. President Donald Trump and President Xi Jinping’s trade truce prompted global stocks to surge higher on Monday but fading optimism over the political deal has since pared equity market gains.

Meanwhile, concerns about slowing U.S. growth appeared to accelerate declines in long-term Treasury yields overnight. Signals from the U.S. central bank last week that it could be nearing an end to its three-year rate hiking cycle pushed the U.S. 10-year Treasury yield to three-month lows, below 3 percent on Tuesday.

Trading volumes are expected to be relatively low on Wednesday, with U.S. stock markets closed as citizens observe a national day of mourning for President George H. W. Bush.

Back in Europe, investors are likely to closely monitor any further political developments as lawmakers continue to debate Westminster’s Brexit plan.

Prime Minister Theresa May suffered a series of embarrassing defeats in Parliament on Tuesday, prompting sterling to fall below the $1.27 mark for the first time since the end of October. The U.K. currency edged up around 0.2 percent to hit $1.2742 during mid-afternoon deals.