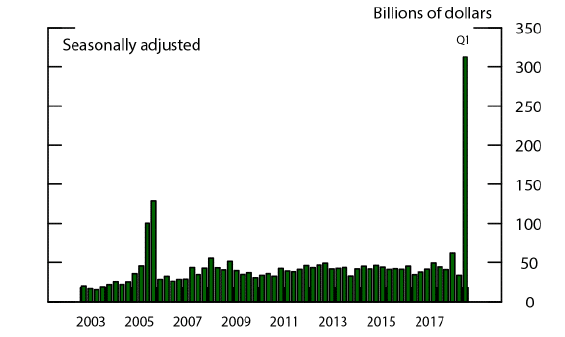 In the first quarter alone, multinational enterprises brought home about $300 billion of the $1 trillion held abroad, according to a recent Federal Reserve study. A good chunk of that repatriated money went to share repurchases — for the top 15 cash holders, some $55 billion was used on buybacks, more than double the $23 billion in the fourth quarter of 2017.

Goldman Sachs economists expect that the total buybacks from all companies in 2018 could exceed $1 trillion.

The Fed’s estimate of total cash overseas is a good deal lower than other estimates that have been as high as $2.5 trillion, so the amount of cash brought home might be even higher.

Companies had been holding profits in foreign countries to avoid additional taxation when it was brought back to the U.S. Under the Tax Cuts and Jobs Act, the foreign holdings were subject to just a one-time tax, thus eliminating the incentive to keep the money offshore.

As the Fed’s chart shows, the return of cash compared to previous years was dramatic.