The US stock market rally is broadening, but danger lurks from overseas 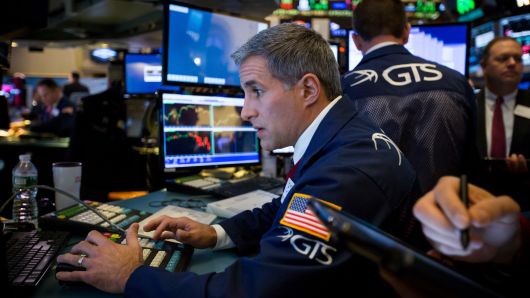 The rally is broadening.

Major indexes have hit historic highs, but the combination of optimism on trade talks, earnings for the third and fourth quarter and a strong U.S. economy is creating a virtuous cycle.

The big complaint about the rally was that much of the move up this year has been centered on technology stocks, and, specifically, on semiconductors and FAANG stocks like Apple and Alphabet.

That’s no longer the case. The market rally has begun to broaden. It’s not just that the major indexes have hit new highs, or that the advance/decline line (the cumulative number of stocks advancing versus those declining on a daily basis) has also hit an historic high. Traders have often spoke in amazement about the “rotation” of the market, how every time one market leader starts to falter, another comes to take its place.

But what happens when the “rotation” just becomes a “rising tide that lifts all boats?” You get the kind of action we are now seeing. Consider two typical ways traders divide the stock market:

But in the last couple weeks, as optimism on trade has returned and earnings estimates for the third quarter have remained strong, the entire market has lifted. Industrials, consumer discretionary, technology and financials — cyclicals — have led, but health care has been strong as well, and even consumer staples has risen.

2. Value versus growth. Growth stocks (the largest sector is technology) are associated with companies growing earnings at an above-average rate. They typically have higher price/earnings ratios. They mostly provide investors with capital appreciation. Value stocks are considered undervalued. They tend to trade at lower prices compared with their fundamentals and are often bought for their dividends. They are also bought when the economy is still doing well but when growth stocks have become too expensive.

Same story here: While growth stocks (technology) have outperformed for several years and continue to generally outperform this year, value stocks (energy and financials, primarily) have had several periods of out performance this year. Banks have been especially strong in the most recent rally.

One reason we have not seen a big sell-off in technology this year in favor of value is because they are not overpriced. The forward P/E (earnings estimates for the next year) for the S&P technology sector is only 18.4, according to economist Ed Yardeni, about where it was last year.

Finally, here’s the stat that most intrigues me. The average stock has been advancing.

The broadest indicators of the market, equal-weighted indexes like the S&P Equal-Weight Index and, most importantly, the Value Line Geometric Composite index, an equal-weighted index of roughly 1,600 stocks that is widely followed as an indicator of the median stock price change, hit a historic high on Monday.

That means it’s not just FAANG stocks driving the market higher. When a widely watched index that specifically is designed to track changes in the median stock price hits a historic high, it tells you the rally is broadening.

What could derail this happy scenario? The concerns of earlier in the year, including the Fed tightening too aggressively, higher commodity costs and trade tensions, have failed to derail the rally.

Several strategists have been pointing to the underperformance of the rest of the world’s economies against the United States as a source of worry. Their concern is shared by investors. Global markets have notably underperformed the U.S. this year because our economy and our earnings picture have been so much stronger:

Still, it’s one thing to underperform, and it’s another to fall apart. Is there any chance the global economy could slip into recession? Oppenheimer’s technical analysis team is one of many that has flagged this as a primary risk not just for global stocks, but also for U.S. investors: “One risk to our outlook is if world equities shift from an underperforming range (rotations continue) to a cycle-ending downtrend (rotations stop).”

How likely is a global recession? Given how accommodative central banks have become, the odds seem against it. But Oppenheimer reflects the current prevailing opinion: “At the least, it confirms our ongoing preference for US over World.”