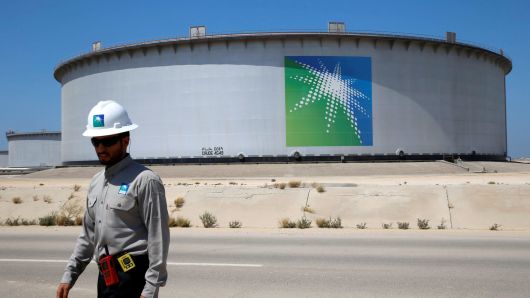 The world’s largest initial public offering is on hiatus. The spending it was to enable may not be.

Saudi Arabia planned to take its giant oil company, Saudi Aramco, to the public markets. It was to be the linchpin of a grand economic vision, generating billions of dollars to pay for future-proofing the kingdom’s economy, including huge investments in technology.

It is now postponed, leaving a large funding shortfall. But Saudi Arabia is pursuing alternative transactions that could ensure its dreams aren’t dashed:

• Saudi Aramco is in discussions to buy a large stake in Sabic, a publicly traded chemical company. Sabic’s controlling shareholder is Saudi Arabia’s sovereign wealth fund, the Public Investment Fund. While the size of that potential acquisition is unclear, media reportssay it could be as big as $70 billion.

• The Public Investment Fund is in talks to raise $11 billion in bank loans from international lenders, according to The Financial Times. It would be the first time the sovereign wealth fund borrowed money.

• Saudi Aramco could still sell a stake in itself. Big companies in China and Russia reportedly expressed interest in an investment in the past. It isn’t clear how much a sale would raise, but it would almost certainly run to billions of dollars.

The Saudi government planned to sell about 5 percent of Saudi Aramco on public stock markets. If the oil giant could have fetched a $2 trillion valuation — and there has been skepticism over that figure— the kingdom would have received roughly $100 billion.

The three new moves, if they were to happen, could yield almost as much as Saudi Aramco’s I.P.O. would have. The Saudi government would then have the financial firepower to pursue its grand economic goals, collectively known as Vision 2030.

That means money to invest in Silicon Valley start-ups. Or to create a giant new city that runs on clean energy and robots.

Or to even help Elon Musk take Tesla private. Saudi Arabia already has a nearly 5 percent stake in the carmaker, and Mr. Musk has said it is interested in helping fund a buyout. But the Public Investment Fund has yet to send such a signal, and is reportedly in talks to invest in a Tesla rival.