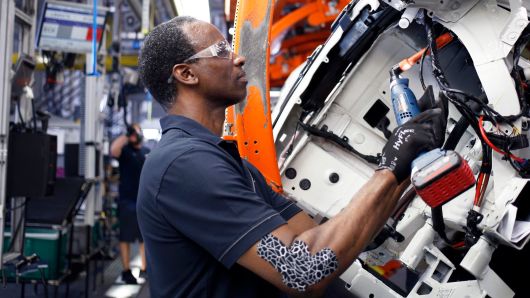 Car stocks got a boost Thursday following the meeting between the U.S. and European Union that earned automakers in the region a reprieve from higher import tariffs.

Car stocks in Europe were on a roll Thursday lunchtime with Fiat Chrysler trading up 5.2 percent, Porsche up 3.6 percent, BMW up 3.5 percent, Volkswagen was up 3.4 percent and Daimler up 2.6 percent.

The sector as a whole was trading 2.2 percent higher on the Stoxx Europe 600 Index and helped DAX in Germany, where the majority of European carmaker’s are from, to rise by 1.5 percent.

In fact, all auto and auto-related stocks, such as auto parts suppliers such as Michelin, Pirelli and Hella, on the Euro Stoxx index were in the black apart from Valeo, down over 7 percent after it cut its profit outlook earlier Thursday.

The boost comes after President Donald Trump and Jean-Claude Juncker, president of the European Commission, had a conciliatory meeting Wednesday at which Trump decided that tariffs on EU car imports would not be increased while negotiations continued, giving both sides more time to avert a potential trade war.

Trump said the leaders had agreed “to work together towards zero tariffs, zero non-tariff barriers and zero subsidies for the non-auto industrial goods.” The future import tariffs on EU cars, which currently stands at 2.5 percent, was not addressed.

Trump threatened in Juneff to increase duties on EU car imports to 20 percent, a move that could damage Europe’s key carmaking industry, particularly those in the region’s largest economy Germany where the car industry supports some 800,000 jobs.

U.S. cars are currently subject to 10 percent tariffs when they are exported to Europe, which Trump has called out as unfair.

Carmakers are being tight-lipped about the meeting. Italian-American auto maker Fiat Chrysler told CNBC they would not comment on the meeting; German automaker BMW told CNBC Thursday that it did not comment on the “tariffs topic” either. Instead it referred to a previous statement in which it said that the “BMW Group is committed to free trade worldwide: Our company has a global production network and a global sales market. We also take advantage of purchasing markets around the world,” it said.

“Barrier-free access to markets is therefore a key factor not only for our business model, but also for growth, welfare and employment throughout the global economy.”

Other industry figures said European carmakers were important for U.S. jobs and production too.

More than half of those vehicles are exported to Europe, Asia and the rest of the world: “Thus, the German manufacturers make a significant contribution to the automotive trade balance of the United States.”

In a further statement Thursday, Mattes said he welcomed the meeting’s outcome, saying “this signal of de-escalation is important.” But market analysts told CNBC Thursday the meeting between Juncker and Trump lacked detail, substance and was ultimately vulnerable to a U-turn by Trump.

“Let’s face it, for now it’s only a ceasefire and the potential tariffs on auto imports from the EU are not off the table,” Felix Herrmann, a Blackrock investment strategist, told CNBC Thursday.

Reinhard Cluse, a chief European economist at UBS, told CNBC’s “Squawk Box Europe” that “Jean-Claude Juncker said ‘we have a deal’ but this is a provisional agreement — they agreed they would continue to talk and while they do that new tariffs, particularly on cars, will not come. But what will eventually come out of this we will have to wait and see, and protectionism remains a concern.”