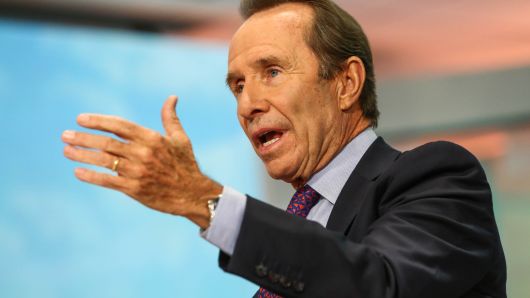 “My view is that neither China nor the United States nor NAFTA want to commit suicide,” Hyman told “Squawk on the Street” on Friday. “This is part of Trump’s ‘Art of the Deal.’ We’ve seen such a great example of how he can change from one day to another with his trip to Europe. It’s astounding.”

The economist’s comment came as the Trump administration seeks to impose tariffs on an additional $200 billion in Chinese goods after implementing duties on $34 billion of Chinese imports last Friday. Many on Wall Street considered the $34 billion-tax, and China’s commensurate response, as the beginning of a trade war.

“The economy’s going well, but investors are worried about trade, as they should be,” he added. “We survey investors constantly, and four weeks ago, they put the odds of a trade war at 15 percent. Now they have it at 60 percent. So investors have moved dramatically toward assuming that we’ll get some sort of trade war.”

Hyman, who has been ranked the top economist in Institutional Investor’s annual poll for more than three decades, has long voiced skepticism about the Trump administration’s efforts to force China into revised trade deals.

“I think he’s tough, but I think he knows that China is not a pinata. He can beat up Mexico,” Hyman told CNBC last February.

He also commented on the so-called yield curve, which is the term that describes the difference between the yields on short-term and longer-term Treasurys.

The spread between two-year Treasury note yields and 10-year note yields is moving closer to zero, or flattening, meaning that there is less payoff for investors willing to hold debt for a longer period of time. Many bond gurus believe that when short-term rates exceed long-term rates — a phenomenon known as inversion — the economy is headed toward recession.

Hyman said while the recent flattening concerns him, he hasn’t taken action to protect against an economic downturn just yet.

“I worry about the yield curve. I’m a big fan of the yield curve, but it needs to go negative before I react to it,” he added. “I don’t expect it to invert, I think bond yields will go up at some point before the fed funds rate gets to 3 percent. But if it inverts, I’ll forecast a recession.”

At the latest reading, the spread between the yield on the 10-year note and the two-year note was 25.4 basis points, down from above 90 basis points early in the year.