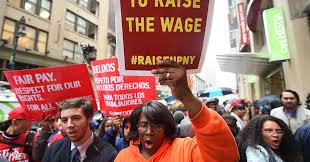 The emergence of “superstar” tech firms is hurting the pay packets of workers, the Organization for Economic Cooperation and Development (OECD) said Wednesday.

The OECD’s annual employment outlook said wage growth in many countries it examined is failing to keep pace with improvements in productivity. Wage growth after factoring in inflation has slowed, on average, in OECD countries to 1.2 percent. Before the global financial crisis took hold in 2008, wages were rising at 2.2 percent.

“This trend of wage-less growth in the face of a rise in employment highlights the structural changes in our economies that the global crisis has deepened, and it underlines the urgent need for countries to help workers, especially the low-skilled,” said OECD Secretary-General Angel Gurria, launching the report in Paris.

The OECD said countries experiencing a decline of income gains going to workers were at the same time witnessing cashflow gains for “superstar” firms that used a relatively high amount of technology and fewer than average workers.

The report claimed that a “creative destruction” has been brought about by tech firms and it has particularly affected countries and industries with low-skilled and highly repetitive jobs.

The OECD warned that technological advances could strengthen a “winner takes most” scenario where worker wages could completely decouple from productivity. It said that as big tech firms continue to benefit, governments should also watch out for anti-competitive forces.

In the fourth quarter of 2017, the only two OECD countries with a better-than-average wage growth were Canada and France. At the other end of the spectrum, Spain, Italy and Australia all witnessed falling incomes.

The OECD said the way to help workers would be to allow them stronger union representation as well as ensuring more investment in skills and education.