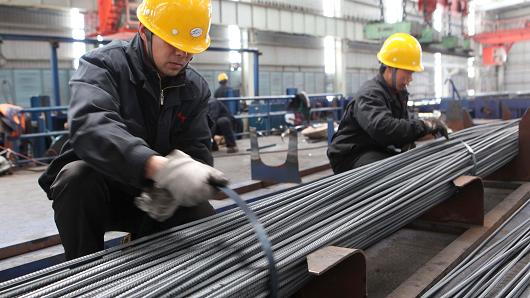 China reported on Thursday that factory activity grew more than expected in May, with the official manufacturing Purchasing Managers’ Index (PMI) coming in at 51.9 — the highest level since October 2017.

The Chinese manufacturing PMI was forecast to dip to 51.3 in May from 51.4 in April, according to a poll of economists by Reuters.

A reading above 50 indicates expansion, while a reading below that signals contraction.

Meanwhile, China reported services PMI at 54.9 in May from 54.8 in April as the manufacturing giant transitions to a services and consumption-driven economy.

“It’s been impressive that China has been able to maintain its momentum in spite of the fact that it’s clear that President Xi [Jinping]is delivering on his promise of maybe sacrificing a little bit of economic strength for stability,” said Carl Tannenbaum, chief economist at Northern Trust, referring to financial reforms in China.

Economic data from China is being closely watched amid trade tensions between Beijing and Washington as President Donald Trump zooms in on America’s trade deficit with the world’s second-largest economy.

Earlier this week, the White House announced it would have a final list of $50 billion in imports that would be subject to 25 percent tariffs by June 15, and two weeks later would announce investment restrictions on Chinese acquisitions of U.S. technology.

China’s official PMI gauge focuses on large companies and state-owned enterprises, while another set of readings by Caixin and IHS Markit focuses on small and medium-sized enterprises — that data set is scheduled to be released on Friday.