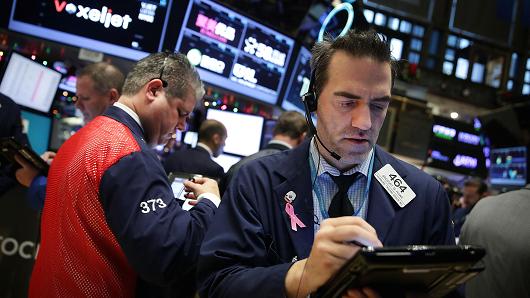 Colgate-Palmolive – The household products maker beat estimates by 2 cents a share, with quarterly profit of 74 cents per share. Revenue fell short of forecasts, however, amid flat pricing compared to a year earlier.

Moody’s – The credit rating agency reported adjusted quarterly profit of $2.02 per share, beating the consensus estimates of $1.80 a share. Revenue also topped Street forecasts, helped in part by a strong performance from the Moody’s Analytics division.

Amazon.com – Amazon reported quarterly profit of $3.27 per share, well above the consensus estimate of $1.26 a share. Revenue topped forecasts, as well. Amazon also announced a 20 percent increase in the price of its popular Prime service, to $119 annual from $99.

Microsoft – Microsoft came in 10 cents a share above estimates, with quarterly profit of 95 cents per share. Revenue also came in above Street forecasts. Microsoft’s results were boosted by a 93 percent profit jump from its cloud business.

Intel – Intel beat consensus forecasts by 15 cents a share, with adjusted quarterly earnings of 87 cents per share. Revenue came in well above forecasts, as well. Among the positive factors: a boost in sales for server chips and other equipment related to data center operations.

Starbucks – Starbucks earned 53 cents per share for its latest quarter,matching forecasts, while the coffee chain’s revenue topped consensus estimates. It did maintain its full-year outlook but said that outlook excludes the planned closure of stores on May 29 to conduct anti-bias training.

Expedia – Expedia lost 46 cents per share for its latest quarter, a loss that was one cent a share smaller than consensus estimates. The travel website operator’s revenue was above forecasts, helped by larger-than-expected bookings volume.

Facebook – Facebook was upgraded to “buy” from “hold” at Stifel Nicolaus, which said the stock is now “too cheap to ignore” despite challenges coming from increased scrutiny over its privacy practices.

Mattel – Mattel lost 60 cents per share for the first quarter, wider than the 39 cents per share loss that Wall Street analysts had expected. Strong demand for the toy maker’s Hot Wheels and Barbie products helped sales, but like its rivals, Mattel was impacted by the closing of toy retailer Toys R Us.

U.S. Steel – The company earned an adjusted 32 cents per share for the first quarter, 3 cents a share above estimates. The steel maker’s revenue was in line with forecasts. The shares are under pressure, however, after U.S. Steel gave weaker-than-expected current-quarter guidance because of operational challenges at one of its production facilities.

Sprint, T-Mobile US – Merger talks between the two are progressing,according to people familiar with the matter quoted by Reuters. The two wireless carriers are hoping to complete negotiations as early as next week.

Baidu – Baidu beat forecasts on both the top and bottom lines with its latest earnings, on the strength of stronger advertising sales for the China-based internet search giant.

Boeing – Boeing shares may benefit after rival Airbus cut output of its A330 passenger jet and reported a drop in profits compared to a year earlier. Separately, Southwest Airlines placed an order for 40 of Boeing’s 737 MAX jets worth $4.68 billion at list prices.

Wells Fargo – Wells Fargo is facing a Labor Department probe of its retirement plan services unit, according to The Wall Street Journal. The probe centers on whether the bank has been pushing participants in low cost 401(K) plans to roll holdings into more expensive IRAs at the bank.

Xerox – Japan’s Fujifilm said it was willing to discuss possible changes to its deal to buy a majority stake in Xerox. Major Xerox investors Darwin Deason and Carl Icahn sued the company earlier this month, saying CEO Jeff Jacobson had raced to seal a deal in order to keep his job.