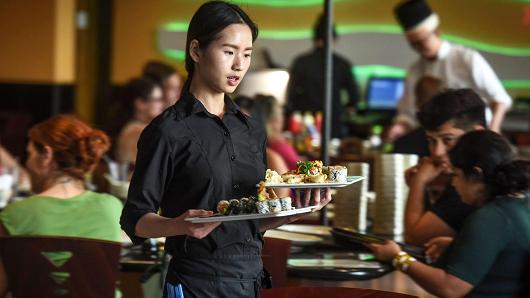 Things could be looking up for the restaurant industry, especially for fast food chains.

Despite higher-than-average snowfall and lower temperatures, sales at restaurants in March could show the second-highest monthly same-store sales gain of the past two years, according to Baird’s David Tarantino.

“We believe this acceleration at least partly reflects the timing of tax refunds,” he wrote in a research note Monday.

Tarantino said that a recent survey of private restaurants suggested that March sales were slightly better than those in February, January and the fourth quarter of 2017. However, less than half of the firm’s typical survey sample has been collected so far.

He noted that Dunkin’ Donuts, McDonald’s, Texas Roadhouse and Jack in the Box, fit this profile.

Tarantino said he expects sales across the industry to continue to accelerate as weather issues dissipate and more consumers take advantage of their tax cuts and returns.

“We are optimistic about the outlook for restaurant stocks for the balance of 2018,” he wrote.