Business sentiment in Japan takes a dip on a stronger yen, trade battles 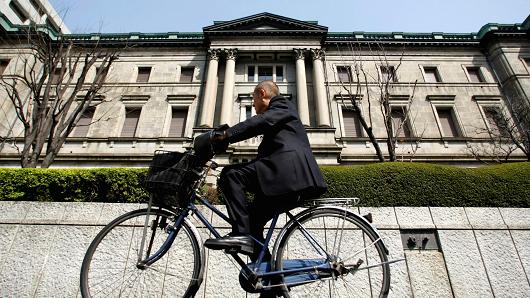 Japanese business sentiment worsened for the first time in two years in the three months to March, a closely watched central bank survey showed on Monday, suggesting the strong yen is taking a toll on business confidence despite an otherwise steady economic recovery.

The Bank of Japan’s quarterly “tankan” survey showed the headline index for big manufacturers’ confidence declining by 2 points to plus 24 in March, compared with a median market forecast of plus 25.

Non-manufacturers’ sentiment worsened by 2 points to plus 23 in March, against a median forecast of plus 24, deteriorating for the first time in six quarters.

Both big manufacturers and non-manufacturers forecast business conditions to sour three months ahead, the tankan showed on Monday. The survey also showed big firms plan to raise their capital spending by 2.3 percent in the current financial year from April, versus the median estimate for a 0.6 percent gain.

Global markets were shaken last month when Trump moved to impose tariffs on Chinese goods and Beijing retaliated, but fears of a full-blown trade war have eased on hopes that negotiations can bring a compromise.

Japanese policymakers fret that a strong yen and trade frictions could deal a heavy blow to the export-reliant economy, which has benefited from solid global demand. Japan’s economy has grown for eight straight quarters, its longest continuous expansion since the 1980s bubble economy, moving Prime Minister Shinzo Abe’s revival plan a step closer to vanquishing decades of stagnation.

But slow wage growth and companies’ reluctance to raise prices have kept inflation well below the Bank of Japan’s elusive 2 percent target.

The tankan’s sentiment indexes are derived by subtracting the number of respondents who say conditions are poor from those who say they are good. A positive reading means optimists
outnumber pessimists.