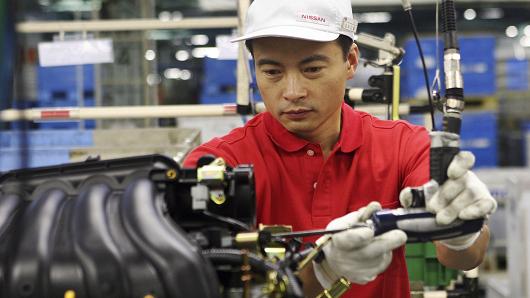 Japan’s industrial production rebounded in February from a large decline in the previous month
and companies forecast further gains in coming months in a sign that factory output is back on the path toward expansion.

Factory output rose 4.1 percent in February from the previous month, less than economists’ median estimate of a 5.0 percent increase but recovering from a revised 6.8 percent decline in January, trade ministry data showed on Friday.

The increase was led by higher output of cars, construction equipment, and semiconductors.

Manufacturers surveyed by the Ministry of Economy, Trade and Industry (METI) expected output to rise 0.9 percent in March and increase 5.2 percent in April.

Separate data showed labour demand eased slightly and the jobless rate edged higher in February, but the labour market is expected to remain tight due to a shortage of workers.

Gains in industrial output suggest that January’s weakness was temporary and the economy remains poised to extend its record growth streak due to solid exports and improving domestic
demand.

Production of construction equipment and factory machinery rose 3.6 percent in February, while production of semiconductors and electronic parts rose 4.8 percent.

The jobs-to-applicants ratio fell to 1.58 from 1.59 in January, which is the highest in 44 years. The jobless rate rose to 2.5 percent in February from 2.4 percent in the previous
month.

Economists say consumer spending could lose some momentum this year but they expect exports to remain strong thanks to sustained global demand.