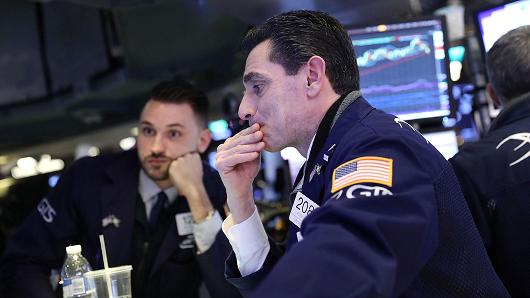 The market needs to bounce Wednesday. Here’s why.

“Is the big momentum trade in tech over? That’s what everyone is asking,” Tim Anderson at MND Partners told CNBC on the NYSE floor Tuesday at the close.

It’s easy to understand his concern. Several stocks were down big. Twitter. Nvidia. Facebook. Tesla. All had some specific news that sent them tumbling.

Two issues have emerged in the last month that may — or may not — affect earnings. First, the trade wars story ebbs and flows, but everyone agrees that an all-out trade war would be detrimental to earnings. It’s just not clear if we will have one.

Second, technology has been a market leader around two big groups, FAANG stocks and semiconductors. Both groups are having moments of doubt and pain. The recent crisis in social media stocks around Facebook has led many to question whether user engagement and advertising will lessen not just for Facebook but for other social media stocks, as well as Google parent Alphabet. That could definitely affect earnings.

Finally, Nvidia’s announcement that it is suspending testing on self-driving cars affected other chipmakers with skin in the driverless car game, including ON Semiconductor, Microchip Tech, Micron and Cypress Semi.

Markets took another turn down in the last hour on Tuesday, when yields on the 10-year Treasury dropped below 2.8 percent for the first time since early February. That brought down bank stocks, another major component for the markets. With banks and tech both weak, the overall market drooped.

It all means there is more uncertainty in the market, uncertainty about trade wars, about technology and about regulatory actions.

And when there is this kind of uncertainty, particularly around fundamental issues that affect earnings, traders often turn to technical signals to give some guidance. Twice this year, on Feb. 9 and Friday, the S&P 500 has held at the 200-day moving average, a long-term trend-line that has become an important psychological barometer.

From a technical perspective, once the market drops below that, there’s not a lot of support.

“Not only are we at the 200-day moving average, but breaking that would also be breaking the trend line from the 2016 low, so it’s doubly important that we hold,” Matt Maley, an equity strategist at Miller Tabak, told CNBC.