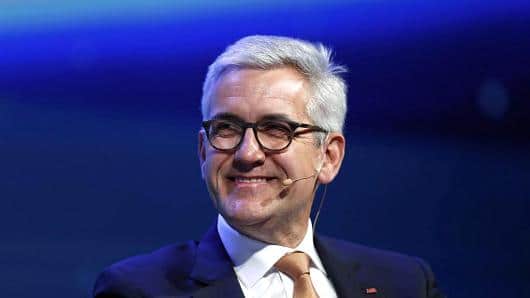 Trade tensions between the U.S. and China — both countries have recently threatened fresh import tariffs — may affect businesses’ decision-making, according to the CEO of multinational technology firm ABB.

For the first time in a decade there’s stability and growth across various markets, Ulrich Spiesshofer told CNBC on Saturday at the China Development Forum in Beijing, and that’s a state of affairs he deemed “quite unique.”

The uncertainties from the threat of a looming trade war may change things.

“So, I’m concerned, I would be concerned, if we get a lot of dampening effects and uncertainties. We need certainty, in terms of decision-making, we need certainty for investment climate, because altogether, I think the underlying demand is there on the consumer side.”

Market watchers have previously warned that worsening trade tensions between the U.S. and China could lead to a all-out trade war — that, in turn, could trigger a recession. In a recent CNBC survey, business leaders said that a trade war between the two major economic powerhouses will have a negative impact on both the U.S. and Chinese economies.

Beijing last week said it may target 128 U.S. products with an import value of $3 billion in response to President Donald Trump’s executive order earlier this month that imposed broad duties on foreign aluminum and steel imports.

The U.S. president had also announced tariff plans for up to $60 billion in Chinese imports, although China didn’t officially connected its Friday threats of retaliation to that White House action.

Spiesshofer explained that ABB invested about $13 billion in the U.S. in the past and that it was making a lot of “significant investments to put ABB strong on the map.” He added that the company was also investing heavily in China and had picked up about 30 local firms under the ABB umbrella.

“So we invest our money wisely in the key market opportunities. China is a very important one, and so is the U.S.,” he said.

ABB operates in areas of utility, industry, transport and infrastructure in about 100 countries.