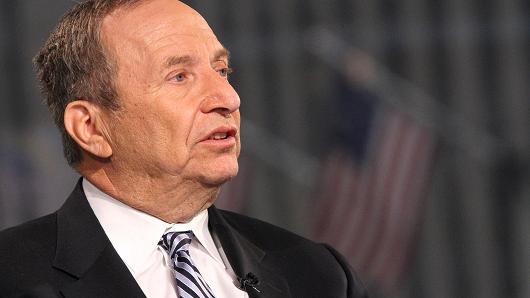 Some of the world’s top economists and business leaders were in Beijing on Saturday for the annual China Development Forum, and one topic overshadowed the entire gathering: The looming threat of a trade war between the U.S. and China.

Beijing on Friday said it may target 128 U.S. products with an import value of $3 billion as retaliation for President Donald Trump signing an executive order earlier this month that imposed broad duties on foreign aluminum and steel imports.

Trump also announced tariff plans for up to $60 billion in Chinese imports this week, but China did not officially connect its Friday threats to that White House action.

“I don’t think we’ve previously at the [China Development Forum] felt like we might be on the brink of a trade war, and I think that certainly is a very unfortunate development,” added Summers, who previously served as president of Harvard University, the director of the National Economic council, the chief economist of the World Bank and the U.S. Treasury secretary.

Nobel-prize winning economists Robert Shiller and Joseph Stiglitzwere also at the annual meeting, and they predicted pain ahead for the U.S. economy if Beijing and Washington ramp up tit-for-tat trade penalties.

U.S. companies, Shiller warned, are not prepared to have China cut out of their supply chains or business models.

“The immediate thing will be an economic crisis because these enterprises are built on long-term planning, they’ve developed a skilled workforce and ways of doing things. We have to rediscover these things in whatever country after the imports are cut off,” Shiller told CNBC. “It’s just chaos: It will slow down development in the future if people think that this kind of thing is likely.”

Stiglitz, for his part, warned that China’s leaders are likely prepared to initiate tariffs based on “a very good economic map with which they will target certain places in the United States where the pain will be maximized.”

An escalating trade war, the Nobel laureate said, could have political ramifications for Trump — especially if trade partners’ retaliations hit the president’s base.

“If there is a broad range increase in tariffs, it would affect their cost of living, the inflation would lead the Fed to raise interest rates at a higher rate, it would certainly impose a risk to the return to the U.S. to robust economic growth,” Stiglitz said. “This may be the one thing that actually does change this group of people who seem to have stuck with him even as he demonstrated bigotry, misogyny, support of people who [have a] Nazi background.”

“They stood with him so far. The question is: When their pocketbook gets hit, will they still?”

Business leaders at the Beijing meeting also addressed the escalating trade tensions, with Johnson & Johnson’s CEO and chairman, Alex Gorsky, emphasizing that open trade is the best policy for businesses to succeed.

“At the end of the day, we think that having, first of all, fair, equitable trade around the world is in everyone’s best interest — Johnson & Johnson’s, but I think for all companies and all countries,” he said.

Rio Tinto CEO Jean-Sébastien Jacques, meanwhile, predicted that “common sense would prevail” between the U.S. and China. Either way, he added, he’ll be focusing on making the best of whatever business situation he’s faced with.