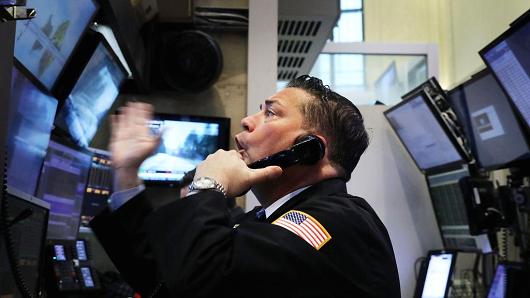 U.S. stock index futures ticked lower ahead of Thursday’s open, as investors braced for a tariff announcement from the White House.

Around 7:15 a.m. ET, Dow futures slipped 171 points, indicating a drop of 136.31 points at the open. The Nasdaq and the S&P 500 futures also indicated a negative open for their respective markets. The moves in premarket trade come after Wall Street finished Wednesday’s session in the red.

The Trump administration is set to announce later on Thursday tariffs designed to punish China for intellectual property theft.

Equities have been under pressure recently as the Trump administration ramps up a protectionist trade agenda. Earlier this month, President Donald Trump announced the implementation of tariffs on steel and aluminum imports, raising concerns about a potential trade war.

As widely expected by the markets, the Fed raised interest rates by 25 basis points on Wednesday and upgraded its economic outlook, saying that economic activity and jobs gains had been strong in recent months.

Market watchers expect the central bank to hike three times in 2018, while the Fed announced that it was increasing its rate-hike forecast for 2019. Following the announcement, Treasury yields rose with the benchmark 10-year yield briefly topping 2.9 percent, before paring some gains.

Switching to Thursday’s session, central banking news will remain on the agenda as the Bank of England holds its latest monetary policy meeting. The British institution isn’t expected to hike rates or make any alterations to its asset purchase program at this meeting.

A slew of economic data are also due to come out, with jobless claims at 8:30 a.m. ET, followed by the FHFA House Price Index at 9 a.m. ET. At 9:45 a.m. ET, a U.S. flash composite purchasing managers’ index (PMI) is due out, followed by the Kansas City Fed manufacturing survey, set to come out at 11 a.m. ET.

Social media firms will remain at the forefront of investors’ minds. Earlier this week, reports emerged alleging that Cambridge Analytica, an analytics company, had gathered data from 50 million Facebook profiles without the permission of its users.

On Wednesday, Facebook CEO Mark Zuckerberg broke his silence on the matter, telling CNN that it had been “a major breach of trust, and I’m really sorry that this happened,” expanding upon a statement he released online earlier that day.

Overseas, stocks in Europe were under slight pressure, while Asia saw a mixed session Thursday.