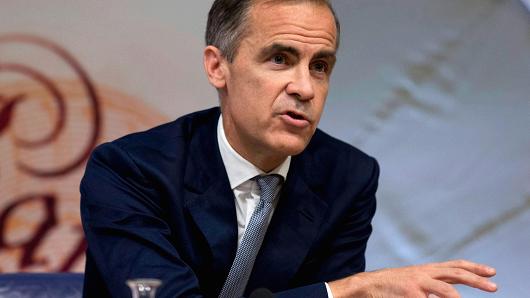 The Bank of England’s (BOE) Monetary Policy Committee (MPC) will meet this Thursday and while it is not expected to hike rates or make any changes to the size of its asset purchase program, investors will be looking for clues regarding the timing of its next hike.

Back in February, BOE Governor Mark Carney startled markets by saying that monetary policy will need to be tightened “somewhat earlier” and “by a somewhat greater extent” than the roughly two-and-a-half hikes over three years that were already priced into the market.

The hawkish remarks led to a quick re-pricing of the odds of a hike in May (now priced at a 70 percent probability) as well as causing investors to cement the three full hikes that were priced in until 2020.

Despite fourth-quarter gross domestic product (GDP) figures being revised down, the U.K.’s official stats agency estimate that for the whole of 2017, the economy grew at 1.7 percent — this is above what the Bank of England had predicted. As actual growth surpasses potential growth, output slack in the economy diminishes. This is the pretext that the central bank has used to warn of further rate hikes in the future.

One of the biggest factors to watch for going into this meeting is that of the political backdrop. The announcement this week from Brussels that a transitional Brexit deal has been secured removes some of the short term political uncertainty and should also give the MPC comfort in its short term assessment of potential exogenous risks.

Most analysts are thus expecting the Bank to give a signal that May is a “live” meeting for a rate hike, however, not all are convinced it is the right move.

Bank of America analysts have warned that the current data have started to surprise negatively with a recent uptick in the unemployment rate, and a tracking GDP number which has slipped to only 0.2 percent versus the Bank’s estimate of 0.4 percent for the first quarter.

They add that Carney has backed himself into a corner and a climbdown from what is priced in would be too risky for credibility at this point.

Simon French, chief economist at Panmure Gordon, also points to the slowest rate of imported inflation into the U.K. in 12 months and further headwinds on the consumer in the second half of the year. For that reason his view is that the Bank will only be able to hike once this year in May.

Morgan Stanley is looking further out and expects one hike in May followed by a long pause until May 2019, after which it will hike every quarter after the official Brexit date as wage cost pressures drive homemade inflation.

In any case, the currency reacted positively to this week’s announcement of a transition deal and even a “hawkish hold” out of the Committee this Thursday could drive further appreciation in the short term.