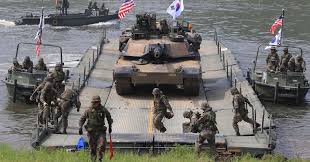 The U.S. is on shaky ground with its allies following President Donald Trump’s proposed tariffs on steel and aluminum.

While fears of a trade war ripple through the global economy, experts are assessing the potential impact on national security, private sector industry and America’s relationship with partners.

“We’ve seen that oftentimes trade is political and security cooperation is political and the two intertwine,” Remy Nathan, vice president for international affairs at the Aerospace Industries Association, told CNBC.

“When we are enjoying good trade relations with other countries we have positive foreign relations, positive security cooperations, and they are oftentimes more interested in purchasing U.S. defense equipment and working with our militaries,” Nathan said. “The opposite is also true, and so those are real concerns that we have.”

He added: “It all depends on how those countries evaluate the steps that we take and what measures they choose to retaliate in some fashion towards us.”

The bilateral relationship between the U.S. and Canada has suffered from the bitter trade dispute between aircraft manufactures Boeing and Bombardier as well as NAFTA renegotiations.

“The U.S. and Canada are about as close partners on defense industrial activities as you can imagine,” Andrew Hunter, Director of the Defense-Industrial Initiatives Group at the Center for Strategic and International Studies, told CNBC.

“The U.S. law actually treats Canadian entities as being part of the national technology industrial base on equal footing with U.S. suppliers in many respects,” he said. “In the current situation, you already have these large pain points in the relationship and this decision is only going to exacerbate that.”

“This is clearly bad for our allies and partners,” Hunter added.

Speaking further to the international ramifications, Seth Cropsey, former Deputy Undersecretary of the Navy under the Reagan and Bush administrations, was concerned that the U.S. was moving toward a protectionist economy.

“If we head down the road of protectionism, then yes, this will certainly affect the cost of American defense goods and that’s a matter of concern,” said Cropsey, who is currently the Director of the Center for American Seapower at the Hudson Institute.

In a shock announcement Thursday, Trump said the U.S. will set a new tariff of 25 percent on steel and 10 percent on aluminum imports. The tariffs are slated to take effect as early as next week and will be applied broadly, which counters Secretary of Defense James Mattis’ recommendation of targeted tariffs.

In a Department of Defense memo related to the proposed tariffs, Mattis said that while the Pentagon “concurs with the Department of Commerce’s conclusion that imports of foreign steel and aluminum based on unfair trading practices impair the national security” the U.S. military requirements for steel and aluminum each only represent about 3 percent of U.S. production.

Mattis cited concerns about the “negative impact on our key allies” and said that therefore “targeted tariffs are more preferable than a global quota or global tariff.”

“While it is true what the DoD said about being able to rely on U.S. domestic sources of supply, I think the analysis didn’t get down to the supply-chain level,” Nathan noted.

“Throughout the supply chain you’ve got companies that make products for both the civil market and the military market. The contracts on the civil side tend to be higher volume and higher profit margin, and it helps them underwrite their investments, hiring and innovation on the military side of the market,” Nathan said. “So when you do things that impact the success of their commercial enterprise, and putting tariffs on steel and aluminum would certainly do that, then [there is] the big question mark about what pressure are you going to put on the defense side of their business.”

Echoing similar sentiments, Eric Fanning, CEO of the Aerospace Industries Association and former secretary of the Army in the Obama administration, told CNBC that the proposed tariff will “impact companies big and small in the aerospace and defense world.”

Given the power and health of the defense industrial base, Fanning noted that he was “concerned about retaliation.”

Fanning’s views were shared by Stephen Biddle, professor of political science and international affairs at the George Washington University Elliott School, who told CNBC that “the funding basis for the U.S. military is the U.S. economy.”

What’s more, Biddle noted that these policies will impact America’s ability to leverage allies, such as South Korea, to support U.S. interests.

“Any time you do something like this that hurts an ally you’re drawing down your capital account of political goodwill that you might want to use for encouraging Canadian or German or South Korean participation where the U.S. has interests,” Biddle added. “And for South Korea in particular, it’s not hard to imagine what those contingencies might look like.”