Fed sees economy past full employment, but with only ‘moderate’ wage gains 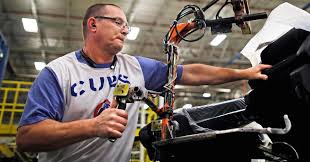 Federal Reserve policymakers see an economy that may be past full employment, financial market prices that are high and overall growth that continues to gather steam.

Those conditions remain appropriate for further interest rate increases, though inflation pressures remain fairly muted for now, according to a key report to Congress the central bank released Friday.

The monetary policy report provided a wide-ranging view of conditions for new Chairman Jerome Powell, who took the Fed’s reins earlier this month. Powell will present the report along with remarks during congressional testimony Tuesday.

“The FOMC expects that, with further gradual adjustments in the stance of monetary policy, economic activity will expand at a moderate pace and labor market conditions will remain strong,” the report said, echoing language from prior Federal Open Market Committee meetings.

The report comes after a year when the Fed hiked its benchmark interest rate three times and at a time of market unease over policy. Investors worry that sparks of inflation will prompt the FOMC to move more quickly than anticipated with rate increases.

While the report showed the Fed is watching the inflation situation closely, it also said that pressures don’t seem to be coming from wage gains described as “moderate.” The report indicated that the Fed still expects inflation to rise to its 2 percent target in the medium term.

“Although there is no way to know with precision, the labor market appears to be near or a little beyond full employment at present,” the report said. “Although employers report having more difficulties finding qualified workers, hiring continues apace, and serious labor shortages would likely have brought about larger wage increases than have been evident to date.”

“Inflation has generally come in below central banks’ targets in the advanced economies for several years now,” the report said. “Policymakers remain attentive to the possibility of such forces leading to continued low inflation; they also are watchful regarding the opposite risk of inflation moving undesirably high.”

Markets worried that the combination of a 2.9 percent annualized wage increase for January and a post-recession high for the consumer price index were early inflation warning signs. The Fed’s preferred measure of inflation, the personal consumption expenditures index, still shows inflation running considerably below the committee’s 2 percent target.

The report spoke at length about low productivity growth that probably was holding back wage gains. It attributed the issues to a variety of factors, including technological advances that didn’t have game-changing impacts of earlier innovations.

In financial markets, the report noted that valuations are still high even with recent gyrations that took the major indexes into correction territory, with more than 10 percent losses each.

“Valuation pressures continue to be elevated across a range of asset classes even after taking into account the current level of Treasury yields and the expectation that the reduction in corporate tax rates should generate an increase in after-tax earnings,” the report said. “Leverage in the nonfinancial business sector has remained high, and net issuance of risky debt has climbed in recent months.”

However, it also noted that household debt has grown at a comparatively low pace, and banks remain well-capitalized.

Fed watchers widely expect the FOMC to approve a quarter-point rate hike in March and likely two more through the rest of 2018. However, probability has risen in recent days that a total of four hikes could be approved this year, and multiple economists have ratcheted up their forecasts.

The Fed report offered little clarity in that regard other than to repeat language that “further gradual adjustments in the stance of monetary policy,” or “gradual increases” in the funds rate would be appropriate. Many market participants took that language, from the January FOMC meeting, to indicate a more hawkish rate stance.

On a separate policy issue, the report said the Fed’s efforts begun in the fourth quarter to reduce its balance sheet have gone smoothly. The Fed is allowing a set level of proceeds from its $4.2 trillion portfolio of Treasurys and mortgage-backed securities to roll off each month, creating more supply in markets.

Though government bond yields have been on the rise lately, the report said the balance sheet operation “did not elicit a notable reaction in financial markets.” The Fed also noted that it remitted $80.2 billion of proceeds to the Treasury in 2017.