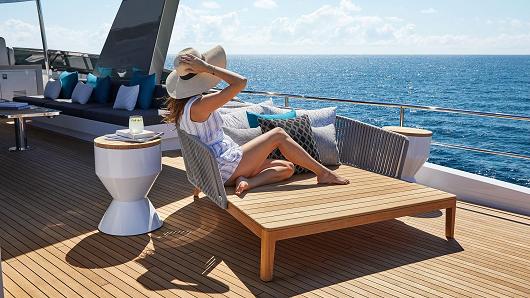 The ways in which cryptocurrency enthusiasts can spend their virtual riches is growing, if only for those who are millionaires — at least on paper.

As bitcoin and other digital currencies gain a broader following, luxury service providers are starting to take notice. The latest is Florida-based yacht dealer Denison Yachting, which on Friday announced that new, high-end yachts can be purchased with bitcoin and a few other cryptocurrencies at the Miami International Boat Show, which kicked off this week.

“It is our job as the dealer or broker to make purchases as easy as possible. So for us this is just another effort to come to where the client is,” said Bob Denison, president and founder of Denison Yachting.”Sometimes my friends on the dock act like this is a marketing gimmick, but we’ve actually gotten results from it and I truly believe in it.”

Cryptocurrencies, of course, have been on a wild ride of volatility, with bitcoin off sharply from a record high near $20,000. Does that make people like Denison unwise to accept it as payment? He certainly doesn’t think so.

“Inherently there would be a little bit of a risk, but I truly believe in the future of cryptocurrency and I truly believe it will stabilize. The more [transactions like this] happen the less crazy it will sound,” he said.

Last year, Dr. Wei Tzuoh Chen put his 9,000-square-foot beachfront Malibu home on the market for $45 million, and explicitly stated he was willing to accept bitcoin as payment. A month later, the crytocurrency began a brutal selloff that briefly dragged it below $10,000.

Denison is himself a cryptocurrency enthusiast. He began investing in digital money about a year ago and has small holdings in bitcoin, ethereum, bitcoin cash, litecoin. He said his personal favorite is Tron, and he also owns a bitcoin miner.

He sees Denison’s offer as a unique opportunity to attract a different kind of customer, the novice yacht owner. And Denison loves explaining what life with a yacht is really like.

“In reality, yachting looks a heck of a lot more like enjoying time with your family on the water. You will find yourself putting your phone down and connecting with other people. The whole experience is a lot different than people not in yachting probaby think it is,” he added.

Denison Yachting has actually been offering cryptocurrency transactions since the company was approved by BitPay in 2014. In that time, they’ve had three bitcoin investors purchase boats, first by converting their cryptocurrency holdings into major currencies.

Denison, however, said he is in active conversations with several customers looking to conduct end-to-end transactions with cryptocurrency.

So type of yacht can you expect to buy with cryptocurrency?

In conjunction with the Miami Boat Show, which goes until Monday, Feb. 19, Denison is promoting the Hatteras line of yachts and sport boats.

For about 900 BTC (around $9.7 million at current exchange rates), a buyer can take home a brand new Hatteras M90 Panacera. The M90 is a newly launched 91 foot, fiberglass yacht hailed for its light and airy interior and its made-in-America craftsmanship. It even has an atrium that can be pulled down for enjoying coffee or a cocktail, right over the water.

Denison emphasized that cryptocurrency can be used to purchase any new boat sold by his company, and that such transactions could be helpful to bitcoin’s reputation.

“There is a misnomer about cryptocurrency, that the only reason people are moving in this direction is to be anonymous. Then you start having that conversation about the legal underworld part of it,” he told CNBC.

“The more you get people transacting in bitcoin for things like cars and homes and boats, the more obvious it is that this thing is a lot more transparent,” Denison added.