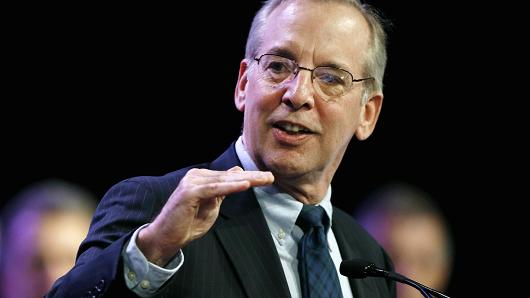 The recent tumult in stocks has not changed New York Fed President William Dudley’s view that the economy is likely to continue to grow above its normal pace.

A rise in bond yields combined with a fall in stock prices is a market adjustment to stronger global economic growth and correlating expectations that the Federal Reserve will continue to raise interest rates, he said.

Dudley spoke as the markets suffered another substantial drop, with the Dow Jones industrials down around 650 points, or more than 2.5 percent, in early afternoon trading.

Even with the Dow nearly touching correction territory of a 10 percent decline, Dudley said his views about the Fed needing to normalize rates have not wavered. Markets widely expect the central bank to enact a quarter-point hike in March, then perhaps two more the rest of the year.

“I have more confidence in the durability of the expansion and more confidence that the Federal Reserve is going to have to continue to more monetary policy accommodation,” he said.

If he saw the stock sell-off persist and threaten to choke off business and household spending, Dudley said he might change his view. But, he added, “that’s not likely.”