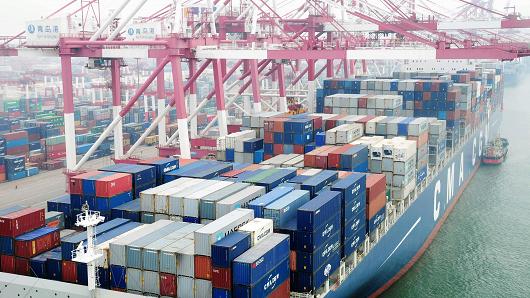 China reported a 36.9 percent jump in imports and a rise of 11.1 percent in exports — both in dollar terms — for the month of January, the country’s statistics bureau said on Thursday. Both figures beat expectations.

A Reuters economist poll predicted that January imports had grown 9.8 percent from a year ago. They also expected export growth to come in at 9.6 percent.

Long Lunar New Year public holidays start next week in China, so the trade data may be skewed due to seasonal factors such as stockpiling.

In December, dollar-denominated exports rose 10.9 percent from a year ago, while imports rose 4.5 percent.

China’s trade surplus for January was $20.34 billion. Economists polled by Reuters had forecast a surplus of $54.1 billion.

The country’s trade surplus with the U.S in January was $21.895 billion, down from $25.55 billion in December. That metric is closely watched as the two countries tussle over trade.

China’s January coal imports were the highest since the same month in 2014, according to Reuters records. Colder weather than usual has hit parts of the country this winter, pushing up demand for heating fuel.

Kuijs said a favorable external environment will continue to support China’s exports in 2018. However, domestic demand may face challenges if there is a “a more pronounced-than-expected impact of the planned financial tightening and slower real estate activity,” he added.