Booming trade is clashing with geopolitical tensions in Northeast Asia 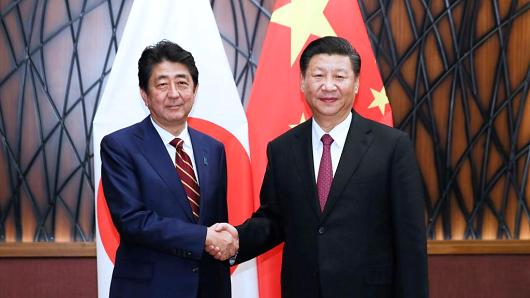 Looking at the volume and growth rates of the Sino-Japanese trade flows, one would never guess that those two Asian neighbors are still unable to come to terms with their painful war history and contested maritime borders while they observe the 40th anniversary of a treaty on “peace and friendship.”

Here are the numbers: Japan is reporting that its exports to Chinaduring the first 11 months of last year rose at an impressive annual rate of 18 percent to $151.4 billion, or 24 percent of Japan’s total export sales. That is more than double what Japan exports to the European Union, and 24 percent more than what the Japanese sell to the United States.

Taking a broader view of those numbers, it turns out that China is, arguably, the key driver of the Japanese economy. Indeed, five years of an ultra-loose monetary policy produced little during the first three quarters of last year: Household expenditures and business investments grew at respective annual rates of 0.7 percent and 0.4 percent, while residential investments, public spending and public sector investments showed no growth at all.

By contrast, exports, a quarter of which went to China, rose 1.1 percent, remaining by far the most buoyant component of Japan’s aggregate demand.

Now, think about this: In spite of that evidence, people keep talking about the crucial importance played by Japan’s cheap money policies for interest-sensitive segments of GDP and for rising stock prices that are supposed to stimulate consumer spending.

Luckily, there are people who know better. A never ending flow of delegations of Japanese parliamentarians, business leaders and government officials flocking to China shows that huge and rapidly expanding Chinese markets are vitally important to the Japanese economy.

Still, those intensive contacts have not helped the Chinese and the Japanese make much progress, if any, on sorting out the sad war legacy issues and border disputes since 1972 when China’s then-Premier Zhou Enlai and Japan’s then-Prime Minister Kakuei Tanaka reportedly agreed to postpone the discussion of tough bilateral problems in order to focus on peace, friendship and cooperation.

Those two statesmen knew that reviving the festering wounds of a 14-year war, and the disputed sovereignty of a group of islands in the East China Sea, would make it impossible to move on and concentrate on projects of economic development.

So, kicking the can down the road continues. Here is the latest installment.

Japan’s Prime Minister Shinzo Abe told the Parliament on Jan. 22, 2018 that he wanted to improve relations with China. That was followed by a statement last week of China’s Foreign Minister Wang Yi that Sino-Japanese relations were at a “crucial stage,” calling on Japan to “put its words into actions.”

The response from Tokyo came with a rider: Yes, we are ready to cooperate and improve the relationship with China, but Japan “cannot accept any attempt to change the status quo” in the East China Sea. In other words, the disputed Senkaku/Diaoyu islands are Japanese territory.

That hit one of China’s most sensitive red lines, prompting the Foreign Ministry to issue a statement saying that the “Diaoyu Island and its affiliated islets have been Chinese territory since ancient times … China’s resolve to safeguard sovereignty over the islands is steadfast.”

So, the umpteenth efforts at the Sino-Japanese rapprochement are now back at square zero.

And here is how that looks: According to the press release following the Chinese and Japanese foreign ministers’ meeting on Jan. 28, “China and Japan should work together to build the East China Sea into the sea of peace, cooperation and friendship.” To make sure that happens, they announced a conflict management device in the form of an “air and maritime contact mechanism.”

Fundamentally, that sounds much like the Zhou-Tanaka 1972 agreement to shelve the territorial dispute. It also reminds one of comments made by China’s paramount leader Deng Xiaoping, during his 1978 press conference in Tokyo, implying that was a wise decision.

South Korea is another example of a strong economic relationship with China caught up in an acutely dangerous security issue with the nuclear-armed North Korea.

Based on the full-year data for 2016, South Korea reported that China took $124.4 billion of its exports. That is 25 percent of South Korea’s total sales abroad and a tenth of its economy. The U.S. came in as a distant second, buying $66.7 billion of South Korean exports, or 13 percent of the total.

Two key issues are interfering with trade and investment flows between China and South Korea. Beijing is objecting to military installations in South Korea that it considers threats to security. The second problem is South Korea’s rejection of China’s proposal to accept a suspension of military exercises with the U.S. (that are simulating an invasion of North Korea) in exchange for North’s suspension of nuclear and ballistic missile tests. Such suspensions are seen by China as the only possibility of bringing Pyongyang to the negotiating table.

At the moment, the two Koreas are talking and preparing their joint participation at Winter Olympic Games in PyeongChang, South Korea. But, sadly, the dialogue will give way to renewed hostilities as soon as military exercises resume after the sporting events.

Japanese news outlets reported Sunday that Abe and the U.S. Vice President Mike Pence will be insisting on those exercises when they meet in Seoul the South Korean President Moon Jae-in later this week.

That will be another serious blow to any attempt at reaching agreement with China on a peaceful resolution of the Korean crisis.

The prospects of improving relations in Northeast Asia are going from bad to worse.

The U.S. has treaty obligations and a large military presence to defend Japan and South Korea. That means that not much can be done as long as Washington considers China a “strategic competitor” and a “revisionist power” allegedly scheming to undermine the U.S. economy and the existing world order.

The question is: How long will China keep its markets wide open to Japan and South Korea? By China’s own assessment, both countries are directly or indirectly involved in events affecting China’s security, maritime borders and its global trade and investment operations.

These are things that transcend China’s concept of “win-win cooperation,” and its restated commitment last week to pursue “major country diplomacy with Chinese characteristics.”

All that will be tested as early as the second half of March (after the end of Olympic and Paralympic Winter Games) — if, as now seems nearly certain, military exercises, ballistic and nuclear tests were resumed on and around the Korean Peninsula.

The Fed and the ECB will have to keep their powder dry. Northeast Asia’s security tensions will destabilize the markets as they continue to reprice assets to reflect America’s strengthening economic activity and rising inflation expectations.

Commentary by Michael Ivanovitch, an independent analyst focusing on world economy, geopolitics and investment strategy. He served as a senior economist at the OECD in Paris, international economist at the Federal Reserve Bank of New York, and taught economics at Columbia Business School.